Well, look who wandered in… Hello and welcome to The Misplay! This is the next installment of the article series that accompanies act two of the podcast.

On our last show, we took an in-depth look at what makes Expedition Amplify combo tick. We laid out how the combo works, where the windows for meaningful interaction are, and ways to attack the deck. We used pensfan62’s decklist for reference. Wsg_Auto brought a take on Amplify combo to the most recent Expedition to Tuesday Night Eternal.

In the spirit of 16-bit off-brand Mortal Kombat, let’s get into combo breaking.

Putting the Pieces Together

At its core, the Amplify combo is a game-winning sequence that revolves around Overloader, cheap Amplify cards, and Pyrotech Explosion. Cards that have cheap amplify costs of 1 power or less allow Overloader to generate power. Hardiness and Diabolic Machinations are the most likely cards you’ll see in this role, but Celebration or Martial Efficiency can provide some redundancy. The deck plays Overloader, then Amplify spells to generate a ton of power, and pays 18 or more power to fire off a Pyrotech Explosion for lethal damage.

With a basic understanding of how the combo works, let’s dive into the finer details of how and when the combo comes together. Remember, 18 power is the threshold to make Pyrotech Explosion deal lethal damage to an opponent with their starting 25 health (it deals 32 damage). In a broad sense, there are two ways to start the combo turn: the safe way and the more explosive way.

The safe way allows you to generate enough power to send a game-winning Pyrotech Explosion even if an opponent removes your Overloader in response to your Amplify spell. The most simple set up is playing an Overloader on turn 7 with a Diabolic Machinations for at least 9 health. The 9-health minimum generates the magic 18 power necessary for a lethal Explosion. One of the nice things about the safe way is that the Machinations is highly favored to find the Pyrotech Explosion if you don’t have it, and just wins the game if you happen to already have it in hand (even if the Machinations is negated).

The explosive way lets you go off a couple turns sooner, but requires more pieces in hand in order to work. It’s possible to combo off on turn 5. If your opponent used all of their power and you’ve sculpted a perfect hand, grab that Overloader with Condemn at the end of their turn 4 and get ready for some fireworks. This combo sequence plays Overloader into Hardiness amplified three times. Overloader generates 6 power and fuels the Diabolic Machinations for a minimum of 9 health. Overloader works its magic and makes the 18+ power to turbo out a lethal Pyrotech Explosion.

If you have this draw every time you’ll be well on your way to that million damage achievement. Just watch out for that player on the other side of the screen — their job is making the game as difficult as possible for you.

Throwing a Monkey Wrench into the Works

Dismantling Amplify combo is a little different than playing against other unit-based combo decks. The mechanism of the Overloader engine works even if Overloader dies in response to the first Amplify spell. That interaction is key to understanding when and how to disrupt the combo. I propose a handful of ways to attack the deck: find a way to kill their Overloader, attack their hand and market access, negate a key spell, or just race them.

If you get the chance to remove Overloader outside of the combo turn or discard it from your opponent’s hand, the game is basically over. Cards like Exploit nab that pesky grenadin from the opponent’s hand. Playing a removal spell on the Overloader in play is possible, but a more difficult prospect. Send an Agent won’t to save you from a Diabolic Machinations for 9+ health. However if your opponent tries for the turn 5 win, that same Send an Agent will save you if you respond to the Hardiness, since that gives them 6 power but they won’t be able to generate more with their Machinations.

If your opponent doesn’t give you a window to remove Overloader, disrupting their hand is another angle to attack the combo. There aren’t a ton of options in Expedition, but Exploit is the probably the best hand disruption spell we’ve had in the history of Eternal. Unless you are lucky enough to nab the Overloader you are disrupting their game plan and buying time, so it’s really important to back up the disruption with pressure. Given enough time the deck will assemble the combo and find ways to beat interaction. For my money, I like to target the deck’s Market access. There are playsets of Condemn and Ixtun Merchant. If you take a Condemn and it forces them to get an Overloader on their turn with a Merchant, that opens up a wider window to send an Overloader straight to the void.

If you favor playing Primal over Shadow, there are still ways to pick the combo apart. *So far, we’ve looked very closely at the role Overloader plays in making the combo tick, but while Overloader is the linchpin, the deck uses a spell-based combo. Spells can typically be fought with face Aegis and negate effects.

Unfortunately, Pyrotech Explosion ignores face Aegis, which leaves negate effects as the primary way for Primal strategies to break up the combo. The spells that matter the most are Diabolic Machinations and Pyrotech Explosion. You’ll have to weigh the options of which one you want to target in each game.

Diabolic Machinations is a good target to negate when you are confident that your opponent doesn’t already have a Pyrotech Explosion in hand. If they goes all-in on their Machinations and you negate it, you leave them hanging onto their health by a thread, facing whatever board presence you have. It should be easy pickings to close the game from there. The danger of this line is that the opponent generated a ton of power. They may have other ways to find the Explosion or, in the absolute worst case, they already have it in hand and you negated the wrong spell.

Pyrotech Explosion is generally a good target to negate since it’s the card that actually deals lethal damage. You may leave your opponent in a state of having used up all of their resources. Hopefully you negate the Explosion, remove the Overloader, and run the opponent over. The danger of trying to negate the Explosion is that your opponent has seen an absurd number of cards if they resolved a Diabolic Machinations, or they have generated a ton of power with multiple other cheap Amplify spells. Then you have to contend with the possibility of your opponent holding their own negate effects, or having redundant copies of Explosion.

Don’t worry if you aren’t playing Shadow or Primal, there’s still hope. When all else fails or you don’t have access to disruption, you can always just race them. If your plan is to just deal lethal before your opponent assembles their combo, just remember the magic numbers.

Their turn 5 combo is risky, because you may remove Overloader and strand a Diabolic Machinations in their hand. If you pressure them into trying to go off early and save a fast spell to kill Overloader, you’ll have no problem closing out the game in short order.

The other magic number is the minimum 9 health the opponent needs to pay when they have 7 power to combo off in one turn. The combo uses health to generate power and dig for combo. The less health an opponent has, the less meaningful resources Diabolic Machinations provides. If something goes a little wrong and you need a Hail Mary, you can try holding up something like Char or a spicier option like Turn Down.

I hope this breakdown of Amplify combo was helpful. I highly recommend playing the deck. I don’t think it’s a meta-defining deck, it’s just very different from how we usually play Eternal and is very fun to play. In general Dire Wolf Digital has done a good job allowing combo decks to exist but not be wildly oppressive to the meta.

Just in case you need a third, highly medium opinion, here is my version of the deck. I hope you have a blast! 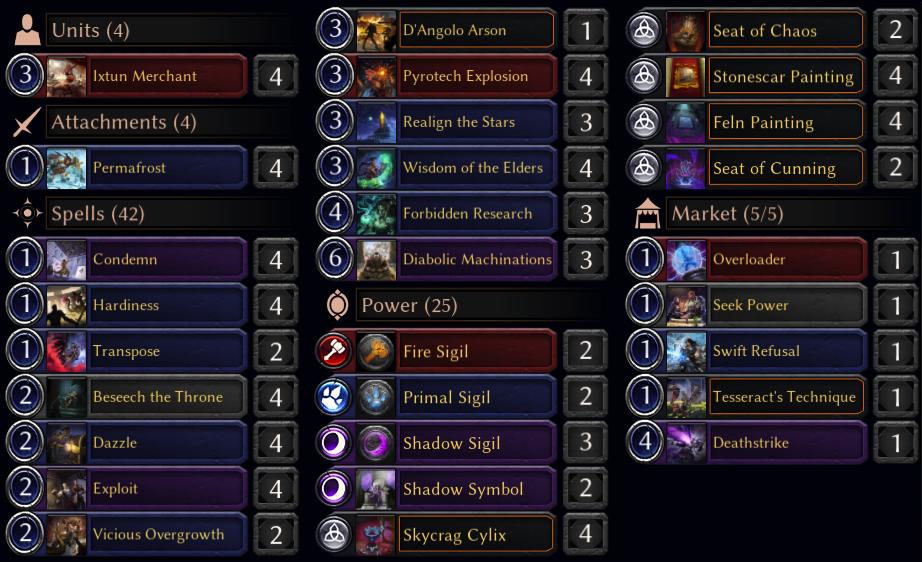