A new set means a new Expedition format! The Misplay wants to share some budget decks for this Expedition format, to provide options to brand new or free-to-play (F2P) players with limited collections, unsure what decks to craft.

With Cold Hunt, DWD has introduced the Expedition Vault – 151 cards that everyone receives for free by logging in – which includes full playsets of common and uncommon staples as well as single copies of 30 rares. Rares from the Vault are a welcome extra power boost, and will not count against these decks’ budgets.

We set some arbitrary guidelines for this article: 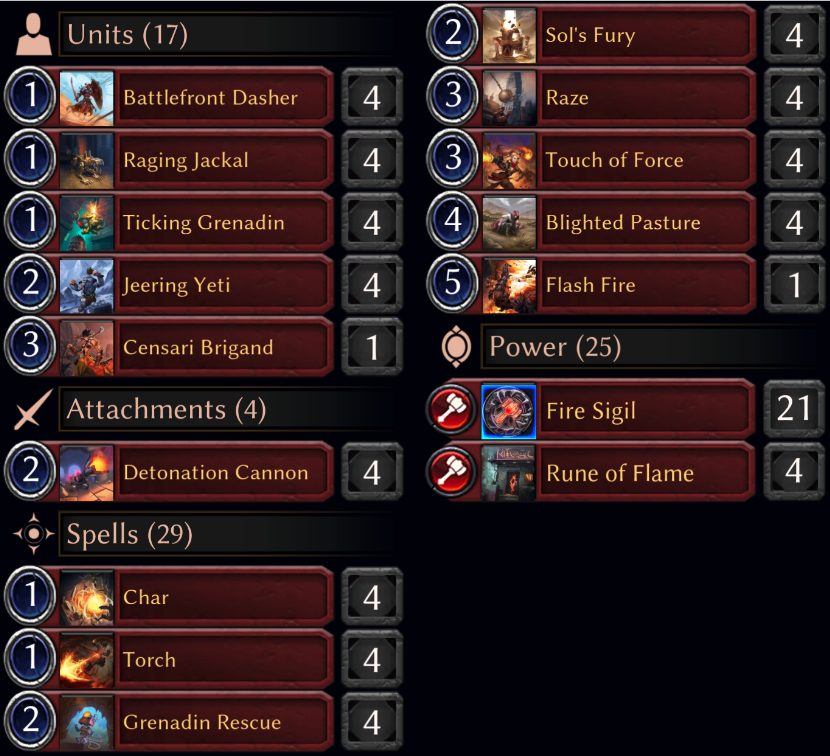 This MonoFire Burn deck brewed up by Essarefess is a different take on Fire aggro than we’ve had in past formats – with Raze and Blighted Pasture, we finally have a critical mass of “burn” spells to move away from units (great when everyone is playing decks full of sweepers). The game plan is pretty straightforward – start with 1-drops like Jackal and Dasher to chip away some early damage, then switch to damaging spells straight to the face.

Touch of Force is your best burn spell and can be used in some tricky ways, like buffing Ticking Grenadin and Sol’s Fury for a combined 14 damage! A well-timed double damage Blighted Pasture punishes opponents for trying to stabilize with lifesteal units, not only undoing the health they gained, but dealing that much again on top of the Pasture’s own 10 damage. Pro-tip: giving Detonation Cannon double damage doesn’t just affect its attacks, it gives you double damage – your damaging spells and relics (including Detonates from Cannon’s amplify) are twice as strong while it’s in play.

While this build is very cheap, it’s also easy to upgrade to the version both Essarefess and I used to get to Masters in November and was brought in a recent TNE-winning line-up – just add Kazuo (to bring back Raze and get buffed by Cannon) and League Explorer from Hour of Glass. 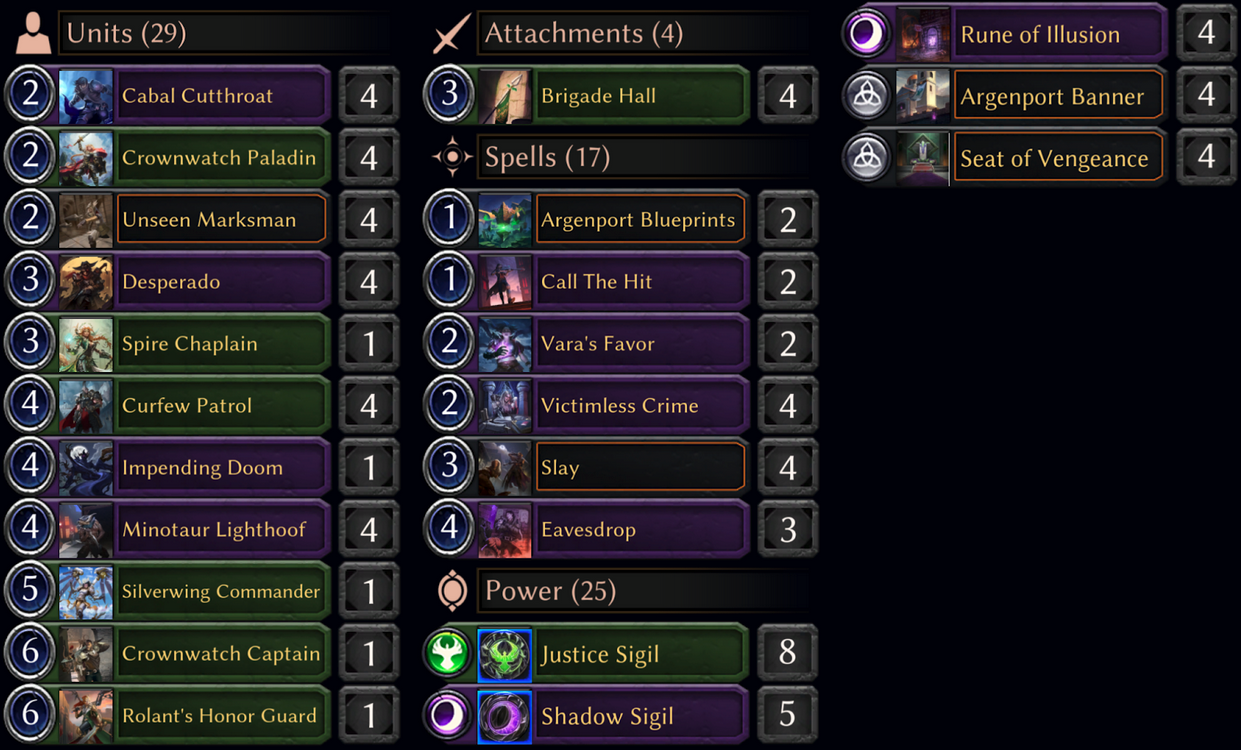 For a midrange option, ThufirHawat brewed up this Budget Argenport Midrange using commons, uncommons, and some powerful Vault rares. The deck has strong units all along the curve – from Crownwatch Paladin, Unseen Marksman, and Curfew Patrol all the way to flying finishers like Impending Doom, Silverwing Commando, and Rolant’s Honor Guard. To back up these units, Argenport has strong removal options, hand manipulation, and Brigade Hall to break board stalls and end the game.

As you climb and build your collection, you can build this 15K version by adding Helena, Raniya, and Hojan before you have the resources to build the deck Colacoma piloted to a top finish in the first TNE Expedition event. 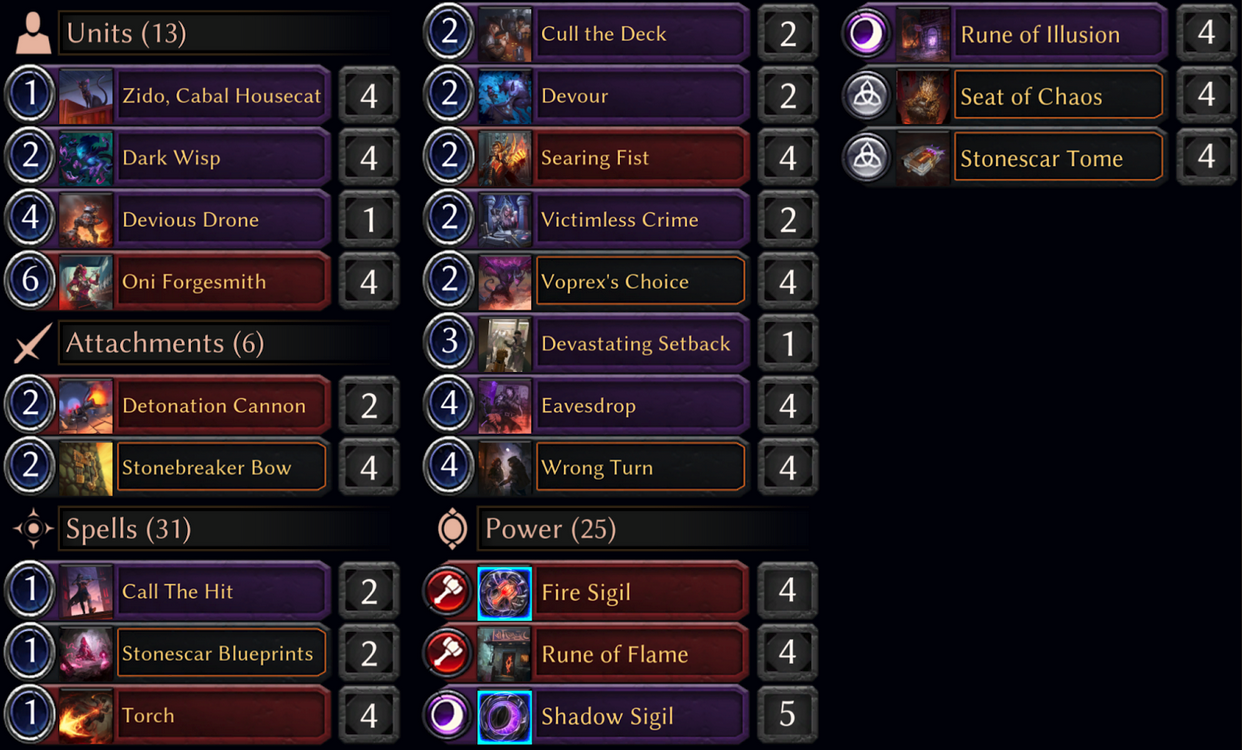 While budget control decks can be challenging (with expensive sweepers or win conditions), I had a lot of fun testing this Budget Stonescar Control deck. Stonescar added efficient removal with Call the Hit, Searing Fist, and Victimless Crime to go with Torch and Vorprex’s Choice. Use Zido and Eavesdrop to discard threats before they hit the board or Wrong Turn to force your opponent to sacrifice something while potentially drawing a rare or legendary off the invoke. You get access to a powerful Armory-style package with Stonebreaker Bow, Detonation Cannon, Oni Forgesmith, and Vorprex’s Choice. All the cards are flexible – either inscribing Forgesmith to hit power or using the weapons/choice for early removal – and in the late game you can bring back weapons with double damage – Stonebreaker Bow keeps growing and can finish through blockers, while using your Oni to bring back Cannon means its Detonates deal 8.

While your collection grows, you can build towards this 15K version with the addition of Sweepers like Saloon Massacre and Vara’s Authority and some revenge top-end with Wyatt and Xo, ultimately  deciding whether to keep the Armory synergies or build towards a more unit-focused mid-control. 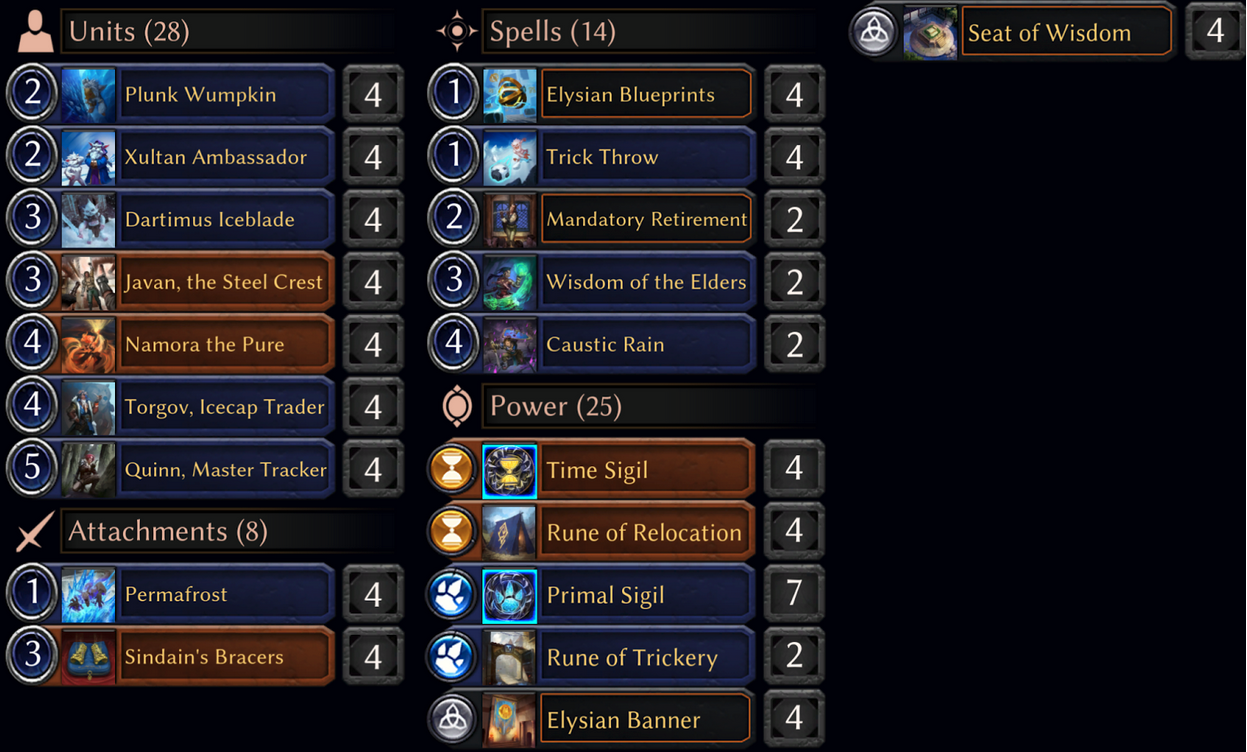 While different builds of Heroes decks are all over ladder, they’re usually expensive as most heroes are promos/rares/legendaries, but we still wanted to provide a starting point with a “Budget” Elysian Heroes (we needed to include promos and some rares (under 15K) to build a deck we felt was defendable) though it could easily be upgraded as you open more heroes or obtain more promos. The Heroes archetype works in most Primal+X factions with Ambassador as a draw engine and the latest promo, Plunk Wumpkin, as a powerful starting point. Time adds Bracers which lets you ramp as you draw off Ambassador. Then add some Primal removal and basically whatever Heroes you have available.

You can also make a solid TPS Heroes list for 15K Shiftstone and upgrade it significantly with Hour of Glass (for even less shiftstone). If you enjoy the archetype then as you build your collection your final build of Heroes could look something like the list Mail brought to TNE, or you could pivot to Hooru Heroes which Sunyveil has been playing, or even brew up a Skycrag or Feln Heroes deck.

These are just some examples of budget decks for players to try. If any readers want to join the brewing fun, feel free to share your Sub-15K decklist in our Discord or in the Reddit comments for this article.