I realize that Expedition isn’t for everyone. A common complaint is that it isn’t a beginner friendly format. The top decks often require legendaries or rares, from the newest set or from older sets that don’t see much play in Throne. With that in mind, The Misplay wants to provide some budget options for the new Expedition format for brand new or free-to-play (F2P) players with limited collections, unsure what decks to craft.

We set some arbitrary guidelines for this article: 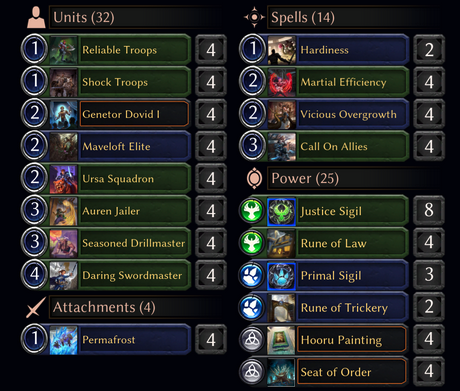 Hooru Soldiers was a powerful Aggro/Tempo deck in the previous format and the addition of more Soldiers and Amplify power has only added to the deck. The gameplan is straightforward – use your cheap units and buffs to beat your opponent down. This Ultra Budget version clocks in at a lowly 7,200 Shiftstone, but can be upgraded to a Sub 15K version with the addition of Argo Ironthorn and some rares (pro-tip – you can purchase the Argo’s Enforcers theme deck for 3,000 gold for a copy of Argo and Argo’s Technique). It can eventually be upgraded to the Hooru Soldiers deck that finished second in a recent TNE event with the addition of powerful legendaries, in soldier Daru Lee or Tarra, Ever Loyal (from the Stormbreak mini-set). 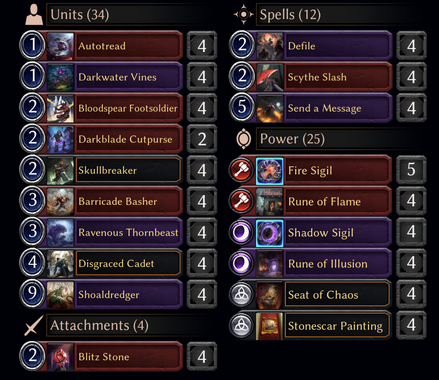 Stonescar Discard Aggro is an extremely affordable (4,600 shiftstone) aggro deck that takes advantage of low cost units and powerful discard synergy to beat down the opponent. Cheap aggressive units like Bloodspear Footsholdier and Skullbreaker pair with overstated units like Barricade Basher, Ravenous Thornbeast, and Shoaldredger to finish the game quickly. This can be upgraded to a Sub 15K version with the addition of D’Angelo Houndmaster to take advantage of empty hands, as well as two copies of the insanely powerful Elding of the Final Hour. With even more shiftstone and both the Buried Memories and Stormbreak mini-sets, you can build a Menace (FPS) Discard deck like the different builds that finished Top 8 in the latest TNE events. 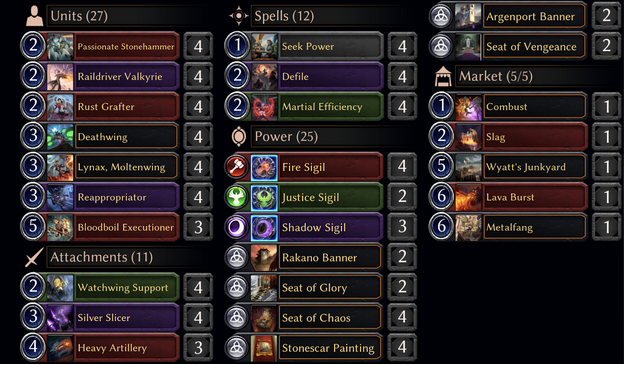 Ambition (FJS) Valks is another deck from the last format that remains strong in the new format. This Sub 15K version takes advantage of fliers, weapons, and the Valk-Warp mechanic to win games. With the addition of the legendary site, Lord Steyer’s Tower, or other rare/legendary Valks, this budget version can be upgraded to any of the various builds that have been doing great in the latest TNE events, including winning the last event. 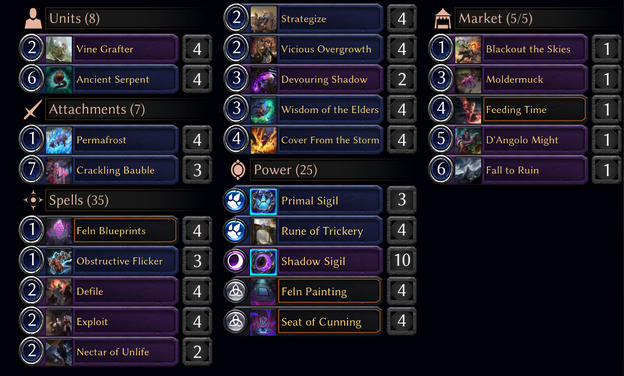 Most budget decks tend to be aggressive due to the nature of the game, but we wanted to include a budget control deck.  This Sub 15K Feln Control deck is based off of a list that 2021 World’s Qualifier TheBoxer played in a recent TNE event. (Thank you TheBoxer for providing comments on our Budget Version of your deck!)

This deck is a standard control build with removal paired with card draw. The key card from Revelations is the new relic, Crackling Bauble, which is your eventual win condition – drawing cards while damaging your opponent. Revelations also added some powerful control options such as the semi-Hailstorm Cover From the Storm, the flexible ping/negate Obstructive Flicker, and a single copy of the legendary sweeper Fall to Ruin in the market. In upgraded non-budget versions you can include more copies of Fall to Ruin, Ambitious Mandevilla, or the new power Primal Sketch to provide more draw.

These are just some examples of budget decks for players to try. To “put our money where our mouth is”, some members of The Misplay will be racing to Expedition masters using Sub 15K shiftstone decks. We will be sure to include this progress in the future – either on the podcast, in a new article, or in our Discord server.

There are other ways to build budget decks than to replace expensive cards in proven decks, and 2021 World’s Qualifier Watchwolf92 is working on a spicy new Sub 15K brew for the  race to Masters and to share with the community (coming soon!).

If any readers want to join the brewing fun, feel free to share your Sub 15K decklist in our Discord or in the Reddit comments for this article.