Pauper is back! It’s been a while since we’ve had an Eternal pauper event, and I for one am super excited to see how the format has changed with the release of Echoes of Eternity. To help instigate this format exploration process, I’ve comprised a batch of decklists that highlight the strategies you’ll need to watch out for (and/or play) in this week’s mini-event.

Without further ado, let’s get started! 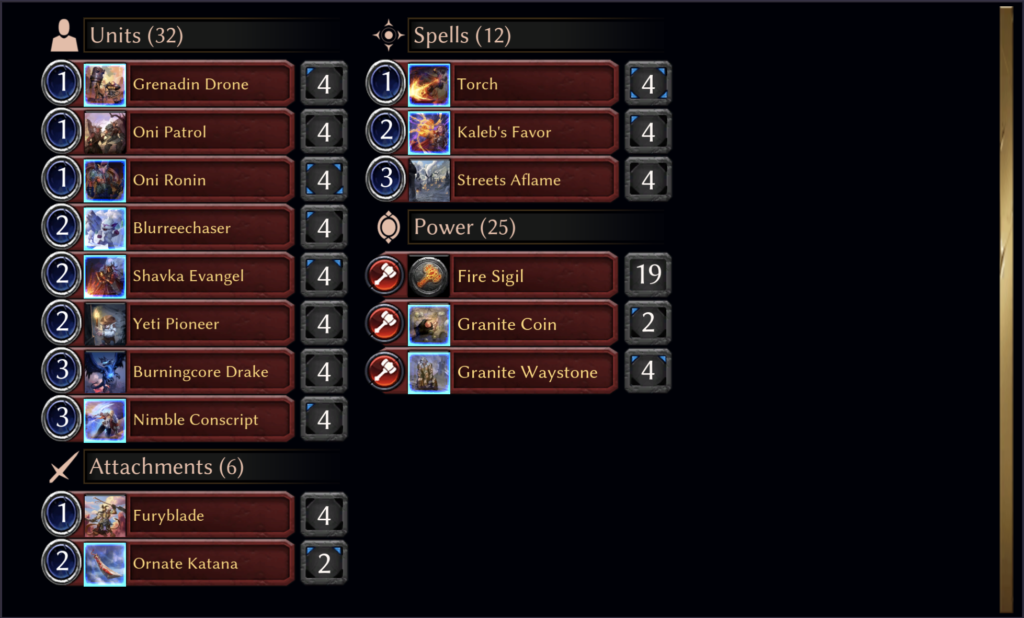 Decks like Mono Fire tend to do very well in a format’s early stages, and Pauper is no different. Mono Fire received two crucial upgrades from Echoes of Eternity: Furyblade and Burningcore Drake. Drake offers evasion and potential card advantage, while Furyblade offers consistency and versatility. Blurreechaser is a format staple that provides valuable card selection and allows the deck to maximize its power usage in the early game.

Redundancy is the name of the game for any deck without easy and frequent access to card advantage. When I’m building a deck like Mono Fire, I want to try and make sure that my best card isn’t miles better than my worst card. This used to be harder to pull off when Pauper’s card pool was smaller, but we’re at a point now where the deck can feasibly play fifty reasonable cards. All things considered, I expect Mono Fire to be an immediate frontrunner in the format; it’s fast, it’s furious and it gets to play some of the best aggressive cards in the game! 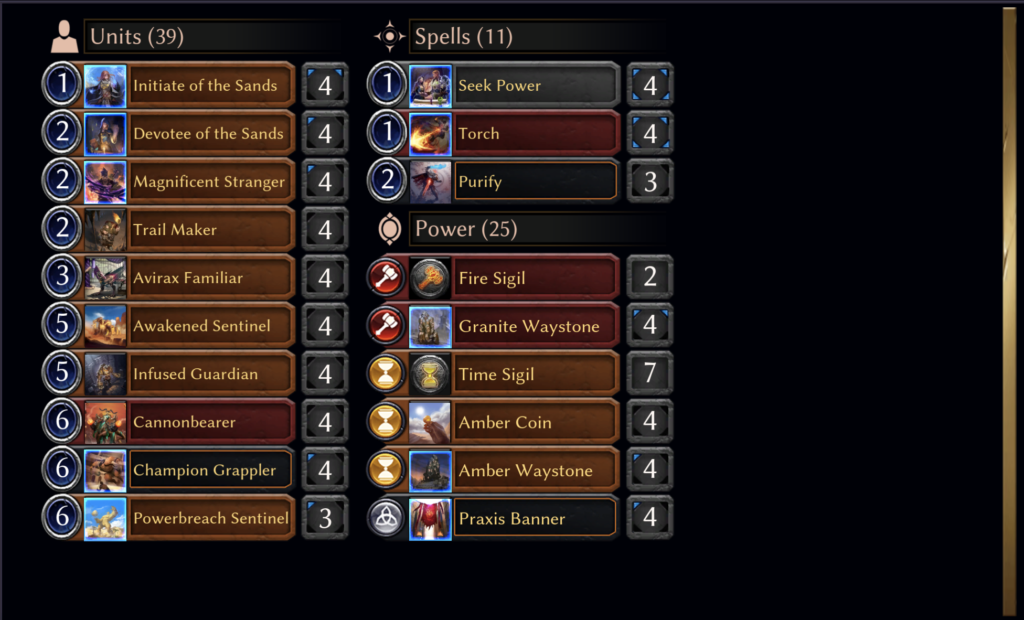 Praxis has been a consistent tier one strategy of past Pauper formats in Eternal, sporting the best Time units in tandem with Fire removal and Cannonbearer. Cannonbearer is a staple unit in this format just as pre-nerf Heart of the Vault was a staple unit in Throne; a six drop with warp, great stats and conditional removal attached is unsurprisingly great.

While Praxis Warp is fairly unchanged relative to previous iterations, Magnificent Stranger and Champion Grappler increase the deck’s overall power level. This might sound strange given that Praxis has historically been one of the most powerful decks in Pauper, but it’s worth remembering that every set brings with it lots of new commons specifically designed for draft. Hence, time usually gets some solid fatties at common, which explains why this deck continues to be a Pauper mainstay. 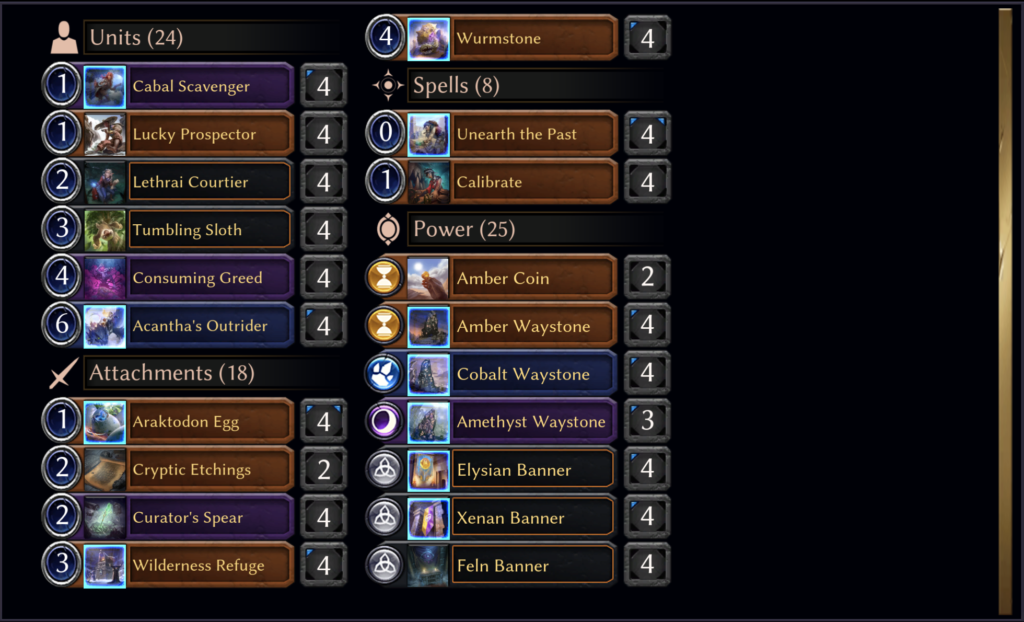 I’ll admit that this one is a bit of a brew, but alas I think the concept is very promising. Aurelian Relics is a synergistic midrange deck that looks to exploit the relic synergies at common rarity; we get our very own Ancient Stirrings (a MTG reference) in Calibrate, which helps us assemble a ragtag crew of under-costed units. In a perfect world, you’re getting a 4/4 for 1, a 3/3 with endurance for 1, a 3/3 with flying for 3, a 7/7 for 4 and a 6/4 + a 2/1 for 4.

With all that said, there is obviously a cost associated with those absurd stat lines. You’re forced to play Cryptic Etchings and Wilderness Refuge, which are both abhorrently below-rate cards, in order to maximize the power of your unit base. Furthermore, you open yourself up to extra angles of interaction by heavily relying on the relic card type, which isn’t as much of a downside in Pauper compared to other formats but nonetheless makes a difference. The deck is really sweet, but it might be a couple pieces away from realizing its full potential. 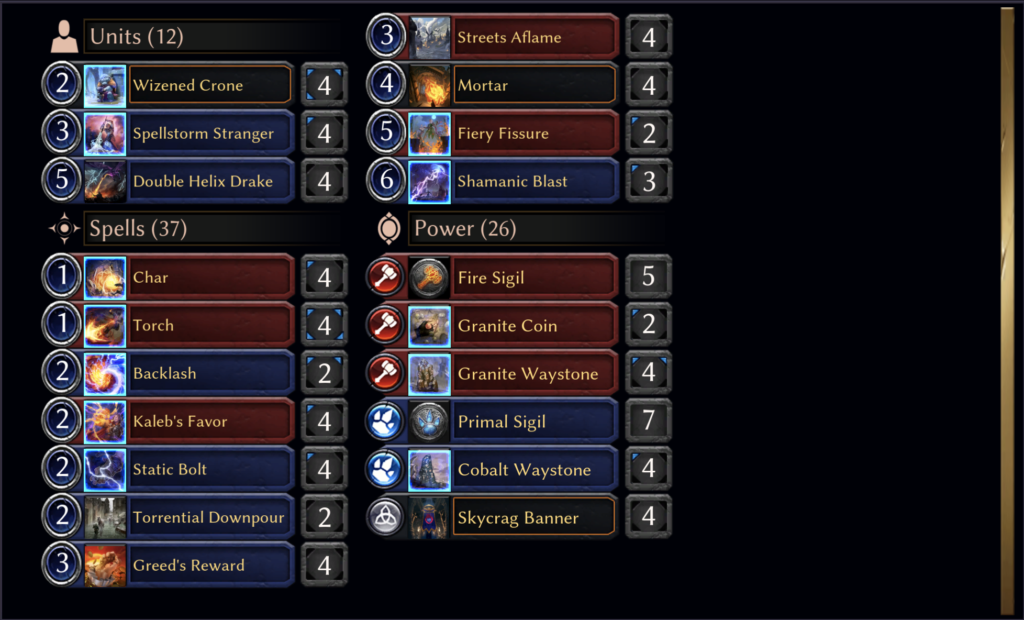 We’re obviously missing Garden of Omens and Prodigious Sorcery, but it’s important to realize that many of this archetype’s core burn spells are legal in Pauper. This deck doesn’t play exactly like the Throne version of Spellcrag because we don’t have an immediate stabilizer to lean on and combo off with. Instead, we’re looking to play a longer game and maximize our removal suite until we’re stabilized and can pivot into burn mode.

This particular build is a rough sketch of the archetype, and with some refining the deck seems poised to position itself well in the Pauper metagame. Removal is worse across the board in this format, meaning that you’re relatively likely to stick one of your enabler units and start the engine. Spell-crag can facilitate some of the strongest turns of any Pauper deck, but it’s also fairly easy to disrupt if you bring the right tools; hence, preparation is the first step towards beating this deck. Pack your incidental lifegain (i.e. Vara’s Favor, Extract) and your unconditional removal (i.e. Eviscerate), or else you may pay the price. 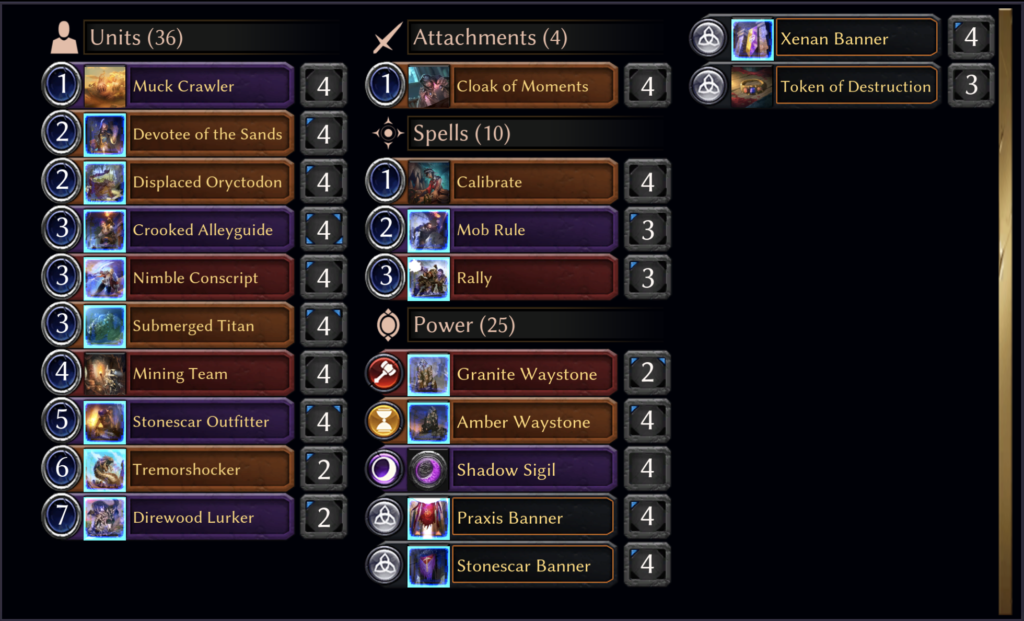 Brody138 and I took this archetype to the Tuesday Night Eternal Pauper event a while ago, and at that time we believed that this deck was right on the border of busted territory. Although Echoes of Eternity didn’t give us any new Shift units, it did give us a crucial consistency piece in Calibrate. While Calibrate can’t find us a Shift unit, it can find us Cloak of Moments. Cloak is by far the best card in the deck because its cost reduction leads to some truly broken sequences. I dump my entire hand on turn 2 or turn 3 very frequently, and there aren’t even any board wipes to keep me honest!

While the wheels can sometimes fall off, I believe that the power level of FTS Shift is so high that it’s worth taking the risk of registering it. I’ll definitely be jamming it in the mini-event this week, and I hope to see you there!