ECQ: Aftershock was another big success for Team Misplay. A staggering 80% of the playing-group (8 of 10) made the Top 64. 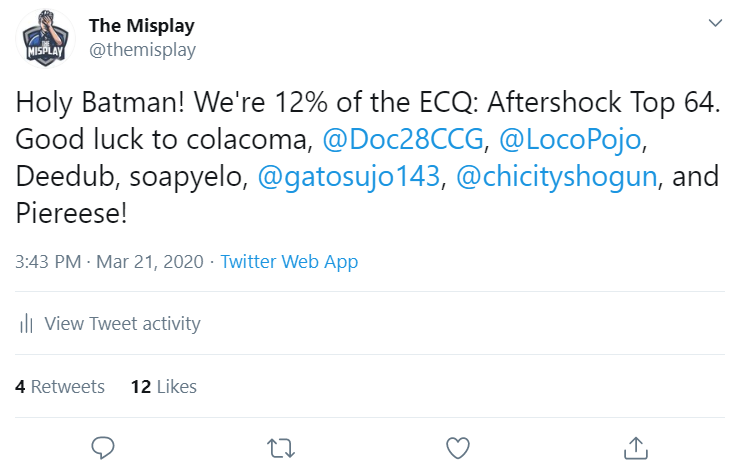 We expected the three dominate decks going in to be Dragons, Strangers, and Unseen. The majority of the team played one of the three while sopayelo, chicityshogun, and gatosujo were on FTS Sacrifice. Locopojo who strolled into Discord at the last hour asking “Is there still time to play?” played Argenport Midrange and absolutely crushed it.

Deedub qualified playing Argenport Unseen. He has made the cut in three straight Expedition ECQs with a near 80% win percentage.

Doc28 set out to build a “lean midrange” Skycrag Dragons deck in opposition to some of the more aggro versions. He nearly put three people into Stage 2. I had a heartbreaking final two games with the list to finish 17-11. Piereese and Doc28 both advanced.

The story of the day belonged to soapyelo who played FTS Sacrifice into the Top 8. As mentioned, we expected to see a lot of Dragons, Strangers, and Unseen and about two-thirds of his matches were against those three. “I had extremely close three game matches in the Top 64, Top 32, and Top 16. In the Top 32 match, my FPS Dragons opponent was swinging for lethal and I lived at two life thanks to Crack the Earth and a token blocking both parts of a Silenced Berserk Crimson Firemaw then Devouring followed by cracking back for the exact 19 life my opponent was at.”

Sadly, his match against Magikarp (A.K.A. The Misplay Slayer) in the Top 8 was not very competitive and both players traded off not drawing power. soapyelo had a “fantastic time” and looks forward to the next ECQ in April.

We see you Magikarp.