This is the story of one Grenadin’s fall from grace. As a warning to our readers, this story contains graphic images, incidents of nerfing, a broken heart, and is, of course, largely untrue.

The picture you have in your mind of Helpful Doorbot is, as he is today, a sullen, legless Grenadin worn down by life. It may come as a surprise to you that they were once a vibrant, jovial Grenadin whose only crime, if it were indeed a crime, was that of pleasing others. 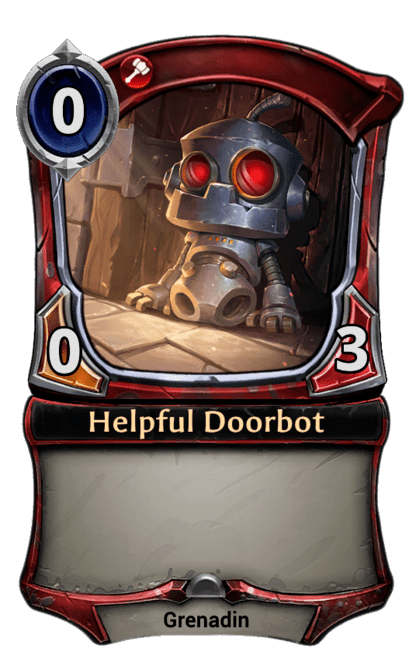 Their given name was Helpful Grenadin and they were not an 0/3. They were a well-stated 2/3 for two with the text: “Summon: Give one of your other Grenadins or Oni +2/0 this turn.”

When Helpful Grenadin enrolled at The Dusk Road Academy, they immediately fell in with popular kids. They were Homecoming King, Treasurer of the 5-F Club, and voted “Most Likely to be Nerfed”. It was Oni Ronin who called him, “The best two-drop in the game, hands down bruh.” Their friendship blossomed and soon they were inseparable. You couldn’t find a deck that included Oni Ronin and not Helpful Grenadin.

In their prime, they would go on to win several ETS events. They landed sponsorship deals with Redbull, NIVIDA, and Cholula. They had a cameo in Chicago Fire and were arguably more popular than Torch.

Not everyone was happy.

Other factions called them “Oppressive”. Members of Reddit threatened to quit the game because, as one Redditor said, “All I see on ladder is Mono Fire. This isn’t fun. OMG! FIX! NERF! PLZ!” Spark Hatcher once tweeted that the only thing Helpful Grenadin was good for was “holding the door open for Ronin”. That tweet has been since deleted.

In the Spring of 2018, frustration had reached a pinnacle. According to court documents obtained by The Misplay, Granite Acolyte armed with a Shogun Scepter had broken into Helpful Grenadin’s home. Luckily, the Acolyte didn’t have the “Deadly” keyword or things would have ended much worse. Of course, many who know how the story ends believe death may have been a lesser fate than what befell the Grenadin.

Two weeks before the release of The Fall of Argenport in the Summer of 2018, Dire Wolf Digital released a balance patch. Helpful Grenadin became an 0/3 with the text: “Summon: Give one of your other Grenadins or Oni +1/0 this turn”. With two simple nerfs, Helpful Grenadin descended into obscurity. Their very public breakup with Oni Ronin was covered on every blog, Twitch stream, and fourteen Eternal podcasts. To make matters worse, Oni Ronin was seen less than a week later on Eternal Warcry in the same deck as Spark Hatcher.

Oni Ronin did not respond to our requests for a comment.

Some still tried to force the pairing, but an 0/3 “that didn’t do anything” didn’t do anything. In a final blow, Dire Wolf Digital altered the art to remove the Grenadin’s legs, removed their summon text, reduced their cost, and renamed them “Helpful Doorbot” following the release of Defiance.

A few QAnon conspiracy theories have taken hold over the years, perhaps the most salacious is the theory that Spark Hatcher held some sort of dirt over Dire Wolf Digital developer LSV.

One look at Helpful Doorbot tells the whole story. “I worry,” says Helpful Doorbot, “for cards like Even Handed Golem who fly a little too close to the sun. I hope my story serves as a warning. Nobody is safe. Nobody.”