This was the cheer Hunter Pence popularized when he was with the San Francisco Giants and perfectly encapsulates how Mark and I felt this week when we had Hunter Pence on our podcast.

This is the behind the scenes story of how that happened. Hopefully you’ve listened already.

“Shoot for the moon. Even if you miss, you’ll land among the stars.”

I follow this principle. Goals should be lofty. Goals you can easily reach aren’t goals. When we started the show last year, there was one person I wanted to talk to about gaming: Hunter Pence. I live in San Francisco. I watched him win two Worlds Series. I play baseball. I coach baseball. And more importantly to us, he has become an ambassador for gaming.

The idea to end every show with, “On the next show, future Magic the Gathering Hall of Famer Hunter Pence” came from the reverse of the Matt Damon bit on the Jimmy Kimmel Live! show. Did I think we could ever really have Hunter Pence on the show? Yes!

We didn’t get any traction until December and then it all happened so fast. In November, I started tweeting this: 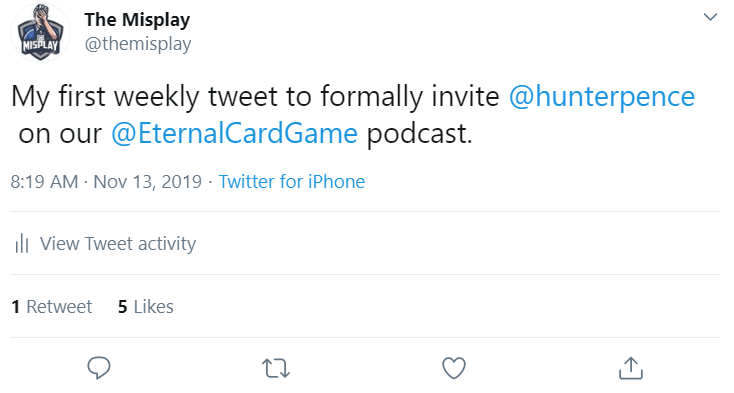 On Christmas Eve, we announced on Twitter that we would be donating our Patreon proceeds for the month to NoKidHungry.org. This of course was a little strategery [sic]. It was also a pretty cool thing to do and an excellent cause to support. Hunter Pence “Liked” this tweet. Yes!

And on our “Eighth weekly tweet to formally invite Hunter Pence…” he commented and gave us his email address. Yes!

The next day – you don’t play it too cool when Hunter Pence tells you to email him – I sent an email pitching our show. I was pretty skeptical. But Ryan (remember him from The One With Ryan?) told me, “Nah, Hunter Pence is the kind of dude who would follow through with that.”

The person I ended up emailing was Mallory, who works with Lexi and Hunter. She was awesome. Full of the same energy Lexi and Hunter have. After a couple weeks of emails, she said, “Yes!”

I reached out to Dire Wolf Digital and asked Scarlatch if there was anything we could give, anything extra they could provide to encourage Hunter to try Eternal. They very graciously set up an account (HunterPence) with a couple of viable constructed decks, cosmetics, and gems for him to jump into Draft.

Mark and I spent about a week refining the questions and flow of the show. Initially, we didn’t have a second half planned because how do you follow Hunter Pence? We came around to the idea when we realized we would probably have a lot of new listeners who had never played Eternal.

I should say Mark rescheduled his flight to be here – in the studio – for the interview. Otherwise, he would have been on Skype and presented a whole host of potential technical issues. We were already about to have two…

First, I remembered five minutes before the call I had “silence unknown callers” on on my phone. Then the first time the phone rang, Hunter couldn’t hear us very well. I solved the issue by changing how my phone connected to our RØDECaster Pro and he called back. We dodged Jekk’s bullet there!

It was an awesome call. He was funny, gracious, had poignant comments on gaming, and was very appreciative of us. While I was editing the show, I noticed how excited I sounded. I was taking breaths between every phrase like a swimmer turning for air:

In honor of the Oscars last night, Mark and I would like to thank our Patrons for their unwavering support and their donation to NoKidHungry.org, Mallory for giving two kids with a dream the opportunity, our partners for the time to chase our passions, and Hunter Pence who is Hunter% headed to the Magic the Gathering Hall of Fame.

If you listened to the show, he said he would love to come back. My guess Hunter Pence is a dude that would follow through with that.