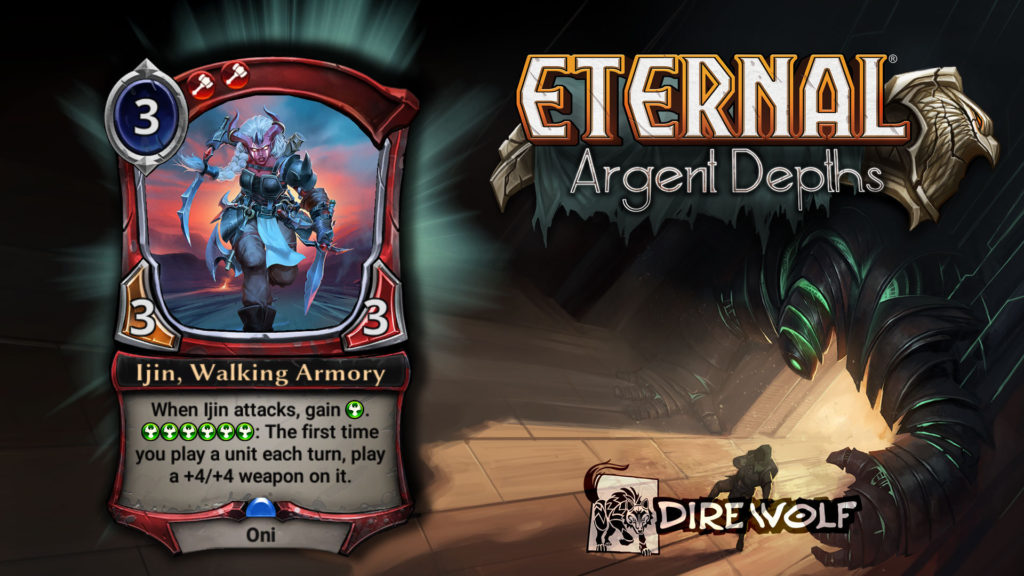 I asked Team Misplay to share their thoughts on Ijin, Walking Armory:

This is a solidly built red drop that transitions Rakano into the mid-game. It shores up green influence for Sediti/Icaria in Throne, enables whatever FFJJJJ Legendary we expect to see, and giving flyers, Aegis units, and Charge units (Rakano staples) the stats they need to survive. In Draft it’s a great pickup: 3/3s for 3 make the limited world go round, and Ijin is an impossible engine once that influence is going. Oni/weapon synergy is a plus, but we’ve yet to see that deck take wing and this isn’t the sole card to do it.

The main risk here is that you play a mediocre tempo unit in comparison to more immediate impactful drops like Whirling Duo, Milos Rebel Bomber, and Mr. Musclegun the 4th. Some work has to be done to push Justice influence to the finish line, but once you’re there you won’t regret it. A serious value card with fixing not offered by other cards of its caliber.

Yah, what he said. Nailed it.

Something that I’ve always been a fan of are cards that you can play throughout the game at different values. I loved Kicker in MtG. This feels like one of those cards.

This card feels built for Surge. It synergies well with super Justice heavy strategies where you can trigger the super powerful 4/4 weapon ability consistently. It’s also an Oni so could find a place in Oni builds. Seems like a fun card that will be good in limited and see some fringe constructed play.

I love it and I am rooting for it to be successful. I want to build the weapon deck LocoPojo hinted at. Part of this cards success will depend on how successful Surge is as a mechanic and how much support Oni’s get in general, but I’m hopeful.

Definitely agree she’ll be a solid card in limited: a 3/3 for 3 that can fix/enable Surge and eventually make all your units giant. In constructed, she’ll probably have a spot in a Rakano Aggro/Mid strategy. But in Throne she competes with a lot of other strong three drops that effect the board when played. She’s definitely a card I’m interested in trying in aggressive strategies and we’ve started to see a lot of influence based effects both in this set as well as with Mantle of Justice and Silverblade Intrusion from previous releases.

I don’t know if I’m the only skeptic. I wrote a few lines about a proto build and even writing it felt like jumping through too many hoops. It seems quite win-more if it’s going unanswered. I do see merit in limited as a surge enabler and also a great late game top deck in a more aggressively slanted deck. Ijin is walking into a world pretty hostile to units that don’t generate immediate advantage. Time will tell if Ijin’s got the armory to survive in it.

Special thanks to Deedub for the spoiler. Tell us what you think on Reddit.