Hello and welcome to The Misplay! Today, by some combination of sorcery, luck, and good-will from Dire Wolf Digital, we are thrilled to present you with a spoiler for the upcoming campaign Hour of Glass. Without further ado, here’s the card in all of its spiteful, corrupted, some kind of glory. Below the spoiler you’ll find lukewarm, hot, and highly-medium takes on the card from as many members of the team as possible. 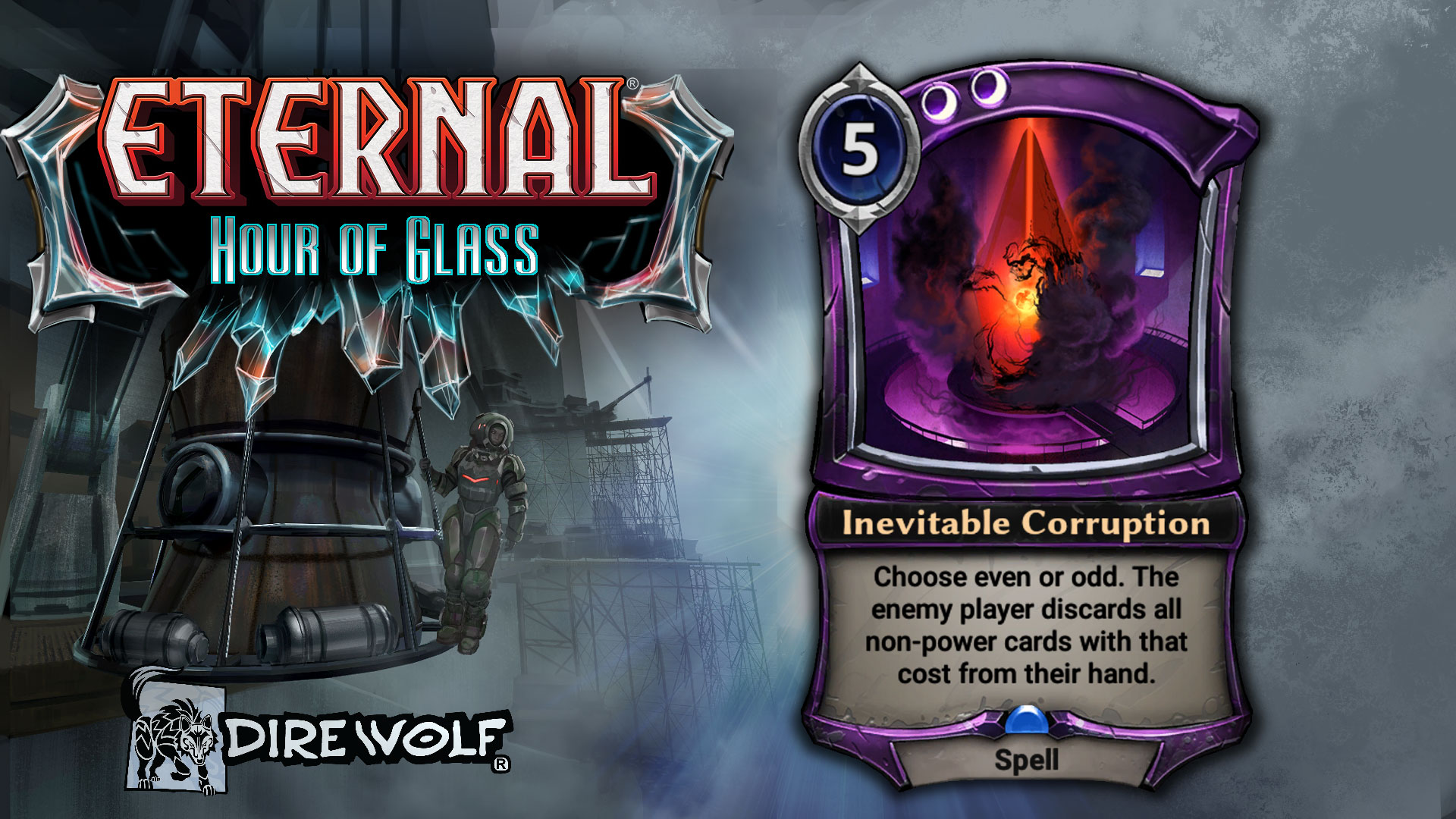 Conditional card that will reward timing and game knowledge. I think this could be a great market card in the right meta or the right circumstances. May be overcosted at 5, but the card finds itself well positioned into some of the recent popular decks. Even Argenport and Even Xenan with Merriest Mandrake come to mind as especially susceptible, as one is slower to start and the other attempts to build overwhelming card advantage, but I could also see Kira frustrated by a well-timed execution as so many of their tricks fall into the 1 and 3 cost “odd” category. In the end it does feel like an attempt by DWD to add another card to the, “keeping Evenhanded Golem honest” quiver, but I certainly don’t mind.

I feel like this is a strong market card in the right meta. The obvious first thought is even decks, but I can see it being good against a lot of combo decks where you can reasonably deduce your opponent’s hand as well. I think you need to be either hitting 3+ cards or hitting a key combo piece for it to be worth it.

I agree with the pessimists on the team. I bet a lot of people will waste their market slots chasing the dream against EHG, and be happy to do so because the one or two times it works will be a lot more memorable than all the games where it does nothing.

At 5 you won’t be sniping that turn two Evenhanded Golem. At 5 you won’t be grabbing multiple drops out of Yetis. The more I think about it the more I think this won’t ever do what you want. It’s almost prohibitively expensive, runs into face Aegis issues, and gives your opponents choices. What this might do is discard your opponent’s hand after they’ve loaded up with their Golems so instead of losing to what’s your opponent’s hand, you lose to their board since you took turn 5 off and spent a card. I’m not often the pessimist here but this card will inevitably be a disappointment.

At 5 power and double shadow the number of decks that will be able to use this card is small. Most likely a market card since it doesn’t affect the board and is slow, however in some cases it can make an opponent discard their whole hand. While this card is far from a power house it is definitely a consideration for some markets.

DWD saw that I was on a blistering four game win streak in gold with an old Even Combrei deck last night so they thought they’d spoil this baby. In all seriousness, I think this is a fun card that could lead to some pretty funny blowouts.

Enough has been — and will be — said about this card and Evenhanded Golem, so I’ll just say that I hope — and am reasonably sure — this doesn’t kill even decks. However, Inevitable Corruption is a decent follow-up play to Exploit. Not only that, Xenan Ramp or Vowerglass could easily play this card on turn 3 or 4. Is that good enough to play it? Probably not, but someone is going to try it and you’ll see their opponent demanding a nerf on Reddit.

I’ll consider playing with this card when it is inevitably changed to 4 cost in a future balance patch. Even then, unless I’m playing against EHG I’m just guessing? I can’t see the hand first (’cause your crystal ball ain’t so crystal clear)? Cool, they had Aegis anyway.

The thing about this card is that while you won’t be casting it before the first, or even the second Evenhanded Golem, that doesn’t actually mean you won’t be able to get value out of it. EHG decks often take some time to empty their hands. However, other than in that circumstance I don’t see a lot of applicability for this card out of the gates. It seems rare that you’ll actually be getting more than a 2-for-1 out of it, and on-board 2-for-1s are generally much more valuable than this because you’re getting rid of cards your opponent actually invested resources in playing rather than just ones that represent potential resources for them. I like that this card exists, but see it as having limited application in most scenarios – since other than EHG decks, the ones this would be best against are Primal control decks. Alas, those tend to have face Aegis much of the time.

Seems like a possible market card at best. 5 for conditional discard is A LOT and it of course does nothing once they have no cards in hand which can certainly happen by turn 5 against aggressive decks. Against slower decks they will have less of a hand by turn 5 and then you have to guess if they have odd or even cards in it, so you won’t always even get the right side of the coin and get few or no cards most of the time. It does seem cool vs EHG decks but other then that seems pretty slow and wonky.

I envision this card as being a bullet that will appear in markets when the time is right. If the meta ends up developing into long grindy games where the haymakers just happen to all be even or odd, this card might do the job. In terms of being proactive with your game plan, you might be able to do something cute with Sol’s Rest or a lot of maximum power with Wrath of Caiphus in Throne.