Hello and welcome to The Misplay, where we evaluate cards based on how badly we are going to play them. My name is Mark and I’m joined by some of the new cards in Eternal’s upcoming expansion, Empire of Glass. In today’s article, I will be breaking down misplays that future Mark is probably going to make in the early weeks following the release of Empire of Glass with a small side of more typical card advantage. Without further ado, let’s take a look at the pitfalls Future Mark is going to fall into in the new expansion. 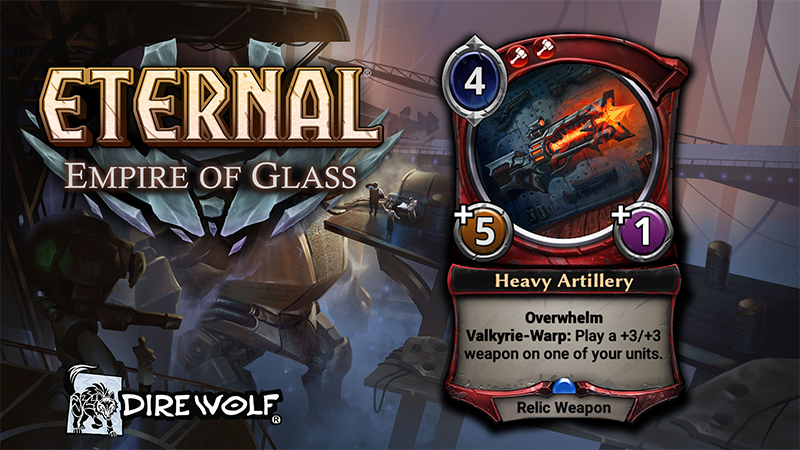 I have to start with the elephant in the room. Everytime I look at Valkyrie-Warp, I get a headache. I have to go find the article about it, read the rules text, read the card with Valkyrie-Warp, read the rules text again, and then maybe I have a shot at knowing everything that’s happening. With Valkyrie-Warp, you get cards that you can play from the top of your deck with upside as long as you have a Valkyrie in play. I have visions of a world where Future Mark starts a turn with his new favorite card, Lynax, Moltenwing in play. Then in a level of good luck he’s never experienced, a Heavy Artillery is sitting on top of his deck. With uninhibited glee, he attacks and trades with an opposing flying unit just waiting for the chance to clear the board and get in some damage with the shiny new relic weapon he just crafted, only to have Heavy Artillery turn its back on him because he just lost his only valkyrie in combat. Future Mark won’t shame concede, but I’m sure Twitch chat will have a field day with that misplay. 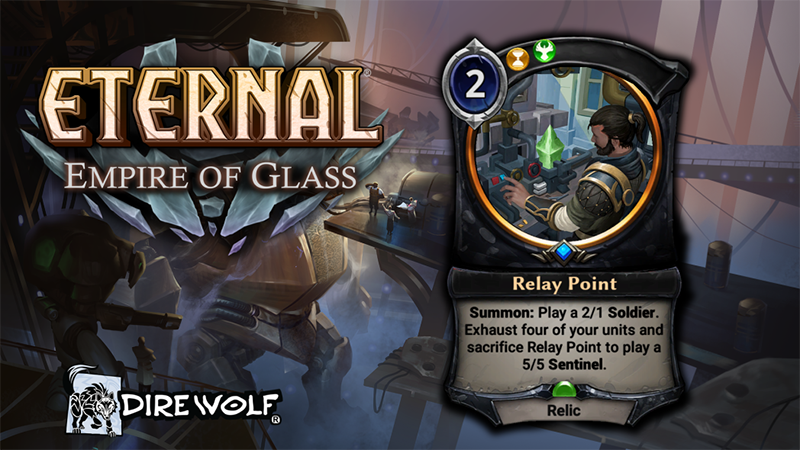 It wouldn’t be The Misplay content without the chance to talk about missing lethal. The Relay Point misplays that Future Mark is going to make are going to be much more game losing than lost opportunity to warp a card off the top of your deck. A 2/1 for 2 in the early game is fine. The extra text that lets you exhaust four of your units to sacrifice your relic and play a 5/5 Sentinel sounds great for the late game. However – and this is a big however – four units is probably close to half of your board state in a grindy game of limited. There are two traps that I hope you won’t fall into that I’m 90% sure Future Mark will. At some point, Future Mark is going to play a 5/5 instead of swinging for lethal with his units. The other lethal Future Mark is going to find is leaving himself dead on board. I can’t stress enough how big a commitment I think exhausting four units in limited is. At parity, you give up your combat position for a turn. If you’re behind, this puts you further behind because it might force you into blocks you didn’t want to have to make later or take away a crucial attack in a tight race. You might also just leave yourself dead on board. Don’t be like Future Mark. Think through the next couple of combats. 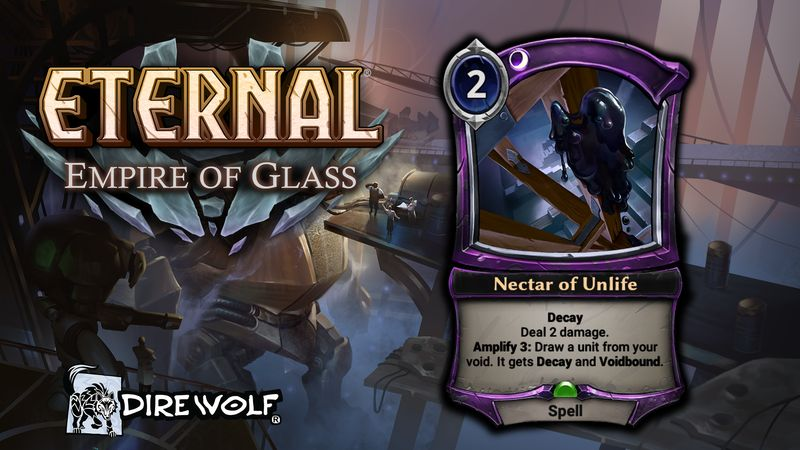 Nectar of Unlife is a sweet card for draft and sealed. Decay has proven itself to be a pretty good way of dealing with recursive units or just getting a unit down to a size where it can be dealt with in combat or with a different removal spell. This card also has some ample upside potential with the amplify effect. I don’t think it’s unrealistic to get to draw two units from your void in a grindy limited game. Getting one unit from amplify is already a strong two for one and any more than that is just gravy. Now remember how I was singing the praises of Decay against lots of stats and recursive units? Well, there is a new ability coming in Empire of Glass that presents a new type of resiliency. Regen prevents the first instance of any damage that gets dealt to a unit with Regen. I know Future Mark is prone to forgetting things, and I know for a fact that he is going to forget that Nectar of Life deals damage. As a result, he’s going to use a precious removal spell on a unit with Regen up and lose a card, lose a turn, lose the chance to Amplify later, and lose the game. 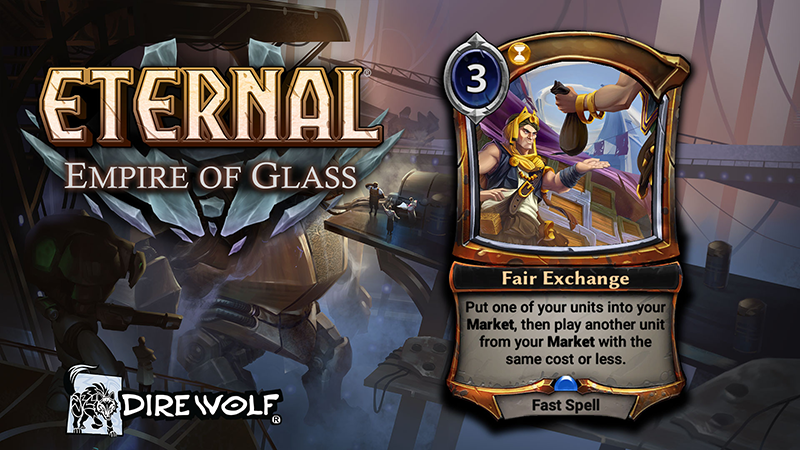 From missed lethal to bad sequencing of turns, all of Future Mark’s misplays have been in-game so far. Fair Exchange presents the opportunity to not only make in-game mistakes but deck-building misplays as well. I’m not a world-renowned deck builder and, while I hope Future Mark is better at building decks than me, he’s not great at it either. Past Mark is the kind of guy who builds Hojan decks without Justice Sigils. Fair Exchange is a really interesting and potentially devastatingly powerful card, but it does come with deck-building constraints. It’s important to note that you can’t cheat on power with Fair Exchange which is probably good for such an inexpensive card. I’m sure Future Mark can come up with some cute combos and value plays to work with Fair Exchange. I’m equally sure he’ll do something like build a low to the ground aggro deck or a leaner mid range deck that tops out at 5 drops. Then he’ll happily build a market with 6 drops and never be able to Fair Exchange. He gets bonus demerits if Fair Exchange is his only way to access the market. Don’t be like Future Mark build an 80 card deck not a 75 card deck with a 5 card Market. 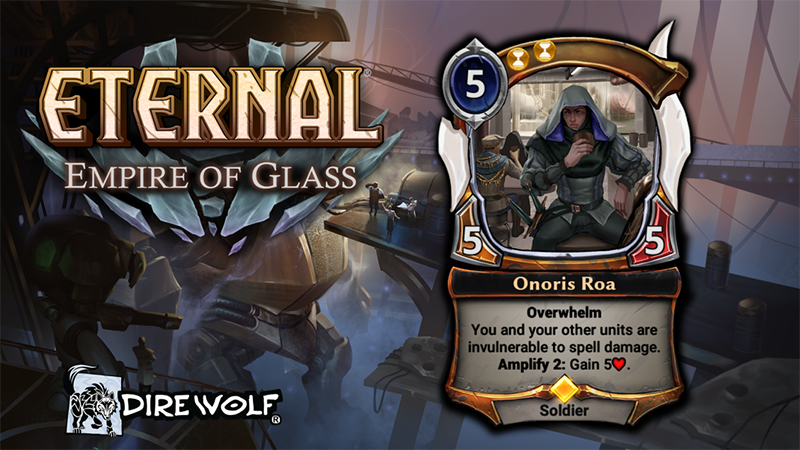 Last but not least, my love for all things FTS in Expedition and At Any Cost in Throne is well documented in our little slice of Discord. Onoris Roa is a chunky speed bump against the At Any Cost game plan. I don’t think this unit kills the deck single handedly (the lack of Cylixes might), but it is a unit that requires an answer before At Any Cost can do its thing. We have a category of misplay for the type of misplay that Future Mark is going to run into. It’ll be right up there with not playing that 12th shadow influence before playing a would-be-lethal At Any Cost or Twisting a souped up Street Urchin to five power with a Hostile Takeover. Future Mark is going to try to play an At Any Cost with Onoris Roa in play and lose horribly. There’s also a high likelihood that he’ll be holding Annihilate or Icaria when he does.

There is a ton going on in Empire of Glass. There are interesting decisions to be made and new lessons to learn going into the new formats. It looks like it’s going to be a long road for Future Mark paved with bad plays, sweet cards, and a lot of embarrassing moments on stream and in Discord. All in all, Empire of Glass looks like a home run of a set. Don’t be like Future Mark. Take some time to read the new cards closely. Check those deck lists twice. Hopefully we can all learn today what Future Mark has to learn the hard way.