Hello and welcome to The Misplay set review for all things constructed and limited in 16,000 words… I’m just kidding, that’s not why you came here. Today, I’ll be taking a look at some of the spoilers from Argent Depths and making a very on brand type of prediction: Misplays I’ll be making with these cards once the full set is live. Without further ado, I am proud to present “Misplays Future Mark will be making with Argent Depths”.

For starters, let’s talk Plunder for a minute. This new mechanic is decision intensive and Plunder has a lot going on. First off it’s always a may, so take the time to check and learn the interface before randomly clicking past the decision in instances when you want to Plunder. The misplay Future Mark is most likely to make is needing to Plunder for a fire influence and Plundering a multi-faction card for that coin toss instead of Plundering a fire card. My math might not be very good but 100% is way better than a 50/50 shot at getting the influence you need. 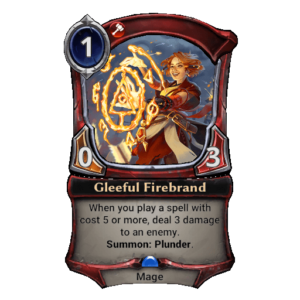 Next up is a cycle that is not nearly as busted as my first reading, the Vows. You’ll note that they have influence makers at the top of the card that designate what faction they support. However, you will also note upon reading the rules text that they grant one influence not two and definitely not three like past Mark may or may not have thought upon reading them for the first time. The cool thing about these is that they come into play undepleted and filter a sigil out of your deck. The more decisions presented, the more chance for misplays. The level I misplay here is mistakenly playing a vow when I think it’s some other kind of power like an Insignia. Future Mark is really going to next level himself by dealing one damage to himself, breaking his relic weapon before getting to attack with it.

Before I cover some Imbue-related misplays Future Mark is certainly going to make, we need to talk about this guy’s name. 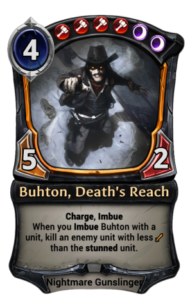 Buhton… I cannot come up with a cool sounding pronunciation of this card’s name. I need a guide on how to read it. Until then (and probably forever after), I will be referring to this card as ‘Button’. It doesn’t matter that it has monster stats at a better rate than pre-nerf Soulfire Drake. Now that’s not a perfectly fair comparison as Drake has flying, but it’s not hard for this to attack for eight or more.

Now, Imbue is another ability that gives you an immediate choice between investing a unit that you will stun for as long as Button is in play, turning it into a truly monstrous unit, or just playing Button and A-spacing your way to victory, sans Imbue. The misplay I can guarantee Future Mark will make is to Imbue a unit that can’t kill a unit he needs to remove and proceed to ruin his attacks for that turn, if not the rest of the game. He will also almost certainly Imbue a unit when it’s better to just A-space for lethal and have that decision blow up in his face.

Imbue does bring some risk of getting pseudo two-for-one’d with the way the mechanic works, so I’ll give you two misplays for one mechanic. Take a look at Roshi, the Entrancer. 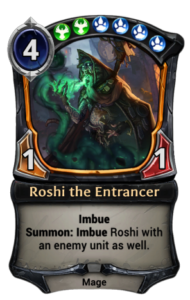 It does offer two Imbues for the price of one. I’m not going to give a perfectly accurate constructed review, though I think this card asks a lot and the weak stats need to hit a couple of pretty solid units to make playing this worthwhile. But I can say – with close to perfect certainty – that at some point, Future Mark is going to try to imbue an opposing unit with Roshi that has endurance, wasting that turn instead of doing something productive. He will be rewarded with a 4 power 1/1 staring down something like a Sandstorm Titan. You could also make the argument that playing this card in the first place is a misplay Future Mark is going to make.

Well, I think I’ve picked on Future Mark enough for one day. Thanks for stopping by and hopefully you won’t make the same mistakes as Future Mark.