Behold! The Lute of Shavka. The instrument Endra used to vanquish their foes and banish Lord Combrei and his army to the Void of Eternity.

And Mark says I’m not a lore guy.

The Misplay courtesy of our friend and Patron, yistout, present the newest Eternal spoiler: Shavka’s Lute. 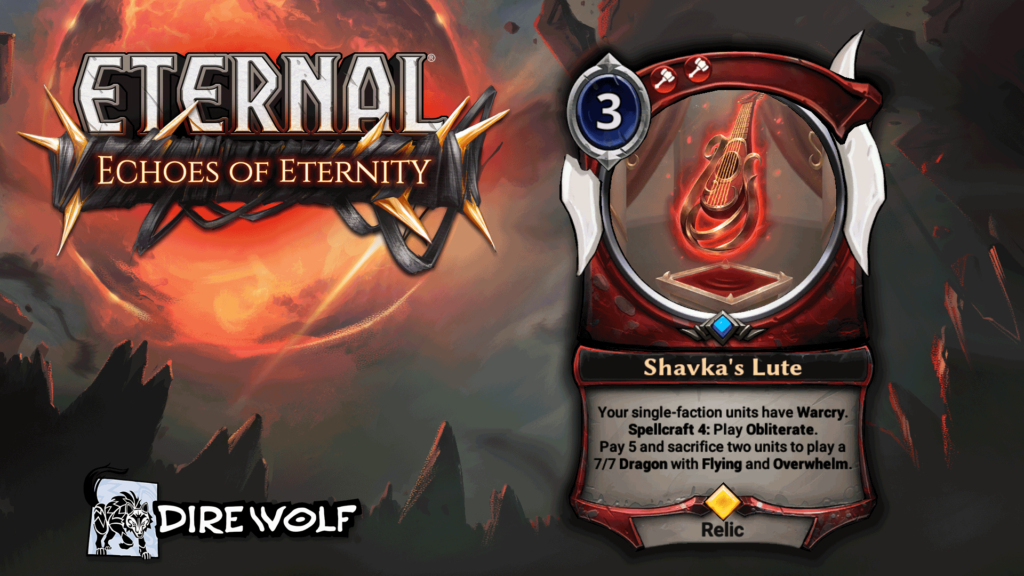 I asked Team Misplay to share their thoughts on Shavka’s Lute:

It’s solid enough with tokens and flexible in cost. It’s removal late and buffs early units. Aside from Grenadin, I kind of like it with Unseen, they get a lot of benefits from having battle skills and are more likely to pair it with Berserk or Quickdraw. Rate is obviously low, but the total punch it packs if you access two or three of its modes could make it worth it considering how easy it is to slam early.

Yah, what he said.

It looks like it could fit well in the market of a go-wide aggro deck. The passive doesn’t seem very strong but the Spellcraft can clear a blocker and/or deal face damage. Meanwhile, you get to pay five and two sub-optimal units become a strong flier, which could close a game. This could combo well with Rat Cage which you could swap out for big dragons.

I’d run it in a Grenadin type deck with ramp cards and Kaleb. You get Warcry triggers off tokens that turn into Dragons and if you have extra power Obliterate stuff. Realistically, I’m pretty sure it’s not a very good card.

Potentially just jank, but it is beautiful jank. As for the competitive side, I think it fits Praxis tokens well. It seem like something I will quick craft four of just because it fits a number of things I love: Warcry, burn, relics, and late game shenanigans.

This looks too slow to be in a standard mono Fire deck. It could definitely do some shenanigans in a Stonescar or Praxis shell. A big question is what units will you be running where the Warcry matters?

The card asks a lot. I’m skeptical of meeting all of the things it asks for: units on board, extra units to burn, a ton of power for a dragon without charge. It all seems quite win more. I’m skeptical, but I would run it in draft and am willing to lose to it a few times in constructed before revising my stance.

It makes me wish that there was a better sacrifice/Aristocrats deck in Eternal. Xenan is doing the most sacrificing but you certainly wouldn’t splash Fire for this. I remember Patrick Sullivan made a super fun Stonescar sacrifice deck during a DWD creators event. Finding a way to maximize the value from the sac outlet is the most interesting to me since it’s repeatable.

Special thanks to yistout for the spoiler. Tell us what you think on Reddit.