Vegans and vegetarians beware. Gone are the days when fruits and veggies don’t bite back. A new mandrake is coming to Myria. It’s big, it’s bad, it’s got a lot of teeth, it gives you a Torch’s worth of life when you draw it, and its first three friends join the party for free…eventually. Hello and welcome to The Misplay, where we are proud to present The Great Kudzu. 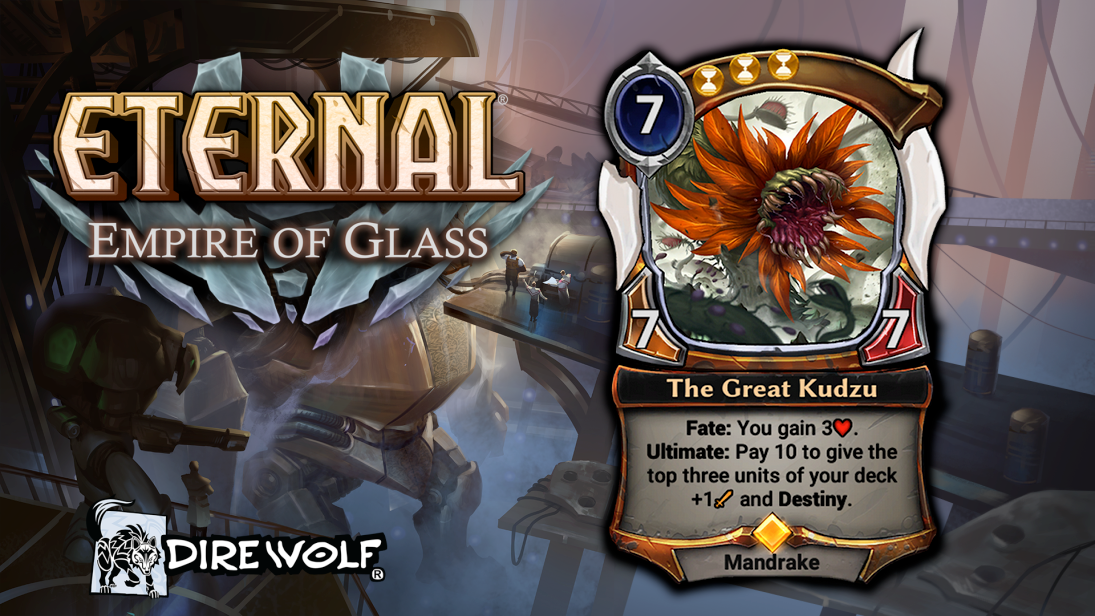 Instead of putting our heads together to come up with one really hot take, everyone on the team gets a chance to share their thoughts on this new unit.

Unfortunately I think 17 total power (7 to play and 10 to ultimate) is just too much to ask. If the unit was good without the ultimate it might be worth considering, but a 7 cost 7/7 is just too weak. The one potential use I could see is off the Fate ability if market switching is very prevalent. Maybe gaining the 3 life can be good, but I doubt it would be as good as Xo generating a treasure.

“Yeah what he said.”

While the Fate ability and ultimate do some interesting things, 7 power for a vanilla 7/7 isn’t very exciting. I will likely try to pair this card with Merriest Mandrake however I do not foresee The Great Kudzu showing up often or at all in constructed play.

Seems a bit expensive so I’m in the camp of “Merriest Mandrake Memes or Bust.”

At first glance, it feels like a card that holds promise, but ultimately won’t see the top levels of play. But part of why I enjoy Eternal is the way new releases can breathe life into some cards that have fallen to disuse, introducing cards that feel like they have an intended purpose and place. This card is bringing back memories of old life force decks with Mask of Torment from seasons past. Between Bastion’s release of Astri Patrol,  the new promo Dichro’s Ruin, and the recent spoilers from Empire of Glass (The Great Kudzu and Onoris Roa), I’m filled with new ideas for some old favorites.

This card won’t be an easy shoe-in anywhere, but I see things coming together for Lifeforce to make a comeback perhaps. Mask of Torment + Merriest Mandrake and this might be a starter idea.The ultimate is insane if you can get it.

Everyone has jumped to the low hanging fruit of the mandrake tree and pointed out the Merriest Mandrake combo and memes potential of this unit. The big plant costs a lot for both the down payment to play it and has a steeply costed ultimate. However, free things are dangerous things. Destiny is incredibly powerful and historically dangerous to the point where the mechanic itself has been nerfed for being insane. It might be a little overly optimistic to pair this with Nahid’s Distillation to draw into a massive Destiny turn but assembling big powerful units is right in Time’s wheel house. Even if they are spaced out over two or three turns, making three free big units that draw a card is not a bad floor case. I’ll go on record as being cautiously optimistic and call this a delayed, pseudo Know Thy Enemy for mono time.

The Fate gaining 3 life and the ultimate are the most exciting parts of this card. A 7/7 for 7 is not exciting with 0 battle skills. Ten is a ton to have to pay to activate an ability and you then have to have something else to have the ability have any kind of effect that turn. I could see having fun with this and Merriest Mandrake. There is probably some kind of magical Christmasland OTK scenario you could set up with this but I doubt that it would be competitively viable. Doesn’t seem like something you will be crafting.

I’m pretty sure this is the same name of a local magician I know. Different abilities. If this Great Kudzu could pull a rabbit from a hat I would play it. As it stands, I don’t play Eternal this cute. I’m sure it can do something powerful. If you can keep this on board with your Merriest Mandrake and have units on top of your deck then I don’t deserve to win. If I ever lose to this card on stream I’ll do 100 pushups. Not at once obviously, I’m not very strong.

By being both expensive to cast and expensive to ultimate, I want to make sure I’m doing something unfair. In Throne, it’s harder to get more unfair than Talir Combo in Time, so I would be looking at Expedition for this card’s home. I want to pair this with Wasteland Broker in a unit-light ramp deck or in a Tota Circle/Reactor Forge/Cheering Section type of deck. This is the type of card that will either rarely see play or be the center of an unfair combo deck, so start brewing today!

This is the kind of card that DWD buffs a year after release because it’s under-played and still no one plays it after the buff. Given the type of deck that this requires, you’re not even guaranteed to give Destiny to good units. Honestly, it’s not even draft fodder. Best case scenario is people try and fail to get this card to do anything, but it will likely just be ignored. The Great Kudzu needs so much setup and support that it should have been named The Great Kudn’tzu. I’m gonna feel really sad if I pull any of these cards from a pack.

If this card said, “Fate: You gain 3, draw a Treasure Trove,” I’d think it could be a really nice fit into some sort of Lifeforce deck. As it stands, it’ll be a fun card to pull off in casual queues. Unlike Talir, this card gives Destiny to non-Time units, which is something. I’ll bet a crazy combo player will pull something off with this.