Are you familiar with Tuesday Night Eternal? If not, check out the first article in the series.

Week 4 of the Tuesday Night Eternal winter season brought us a brand new Expedition format with Empire of Glass. Let’s see what the first two weeks of Expedition brought to the table.

Special thanks to TheBoxer and Stormblessed for co-commentating the two tournaments with me and Essarefess who has worked diligently behind the scenes to keep the tournaments running smoothly. 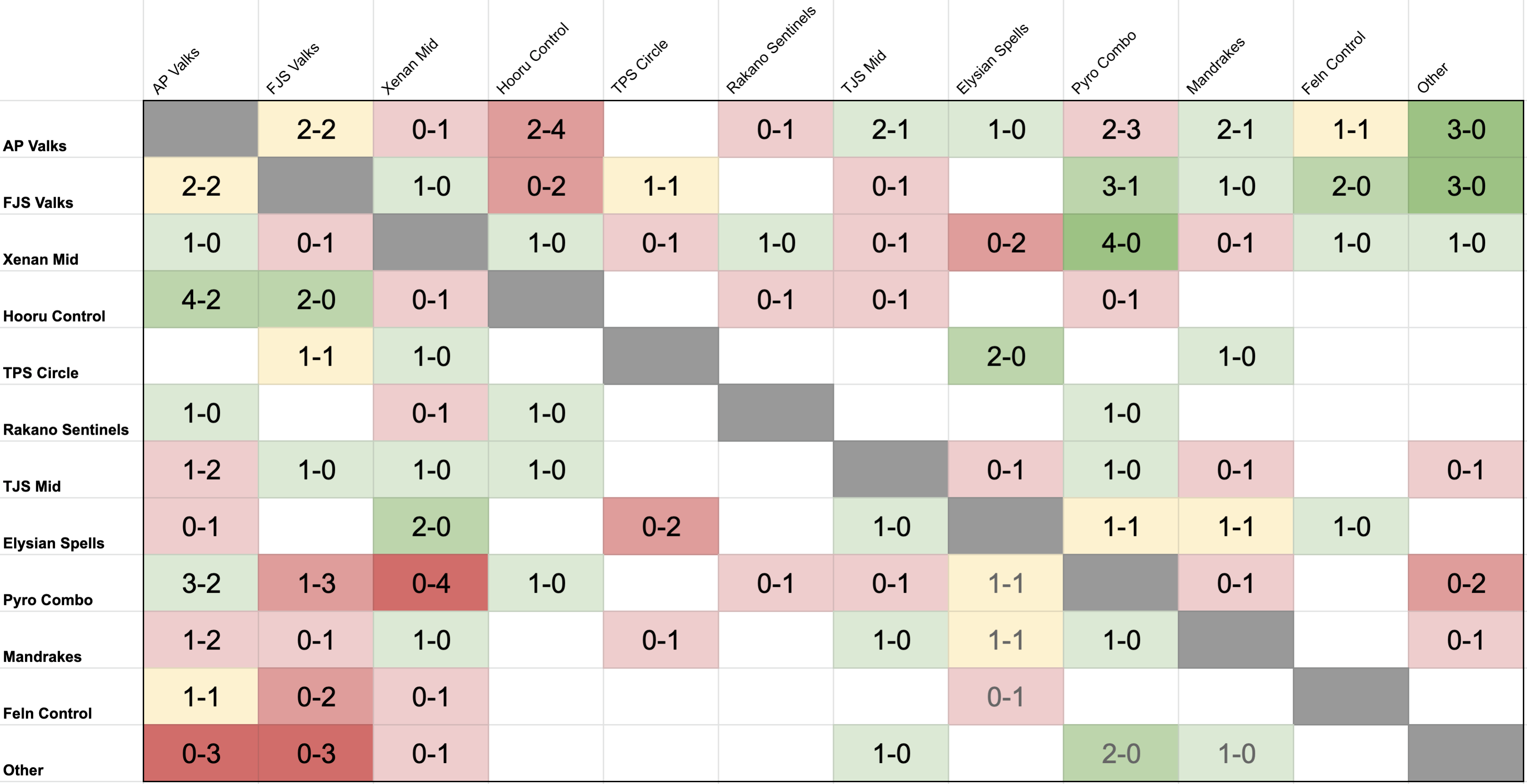 The most popular deck by far was Valkyries, some going straight Argenport, others splashing Fire. While very popular, the straight Argenport build only put up average performance over the weekend, although johnkkez and theovermaster did both pilot it to Top 4 on Friday. Nine players ran this deck for a combined 19-16 record, including two Top 4s.

The Valkyrie build splashing Fire for cards like Ijinn, Walking Armory and Lynax, Moltenwing actually performed quite a bit better on average, including a trophy on the back of a warped Heavy Artillery from Applechips.

One of the more unexpected decks of the weekend was the Xenan Midrange (not Mandrakes) build that Team Eternal Journey brought. Combining quality interaction with powerhouse cards out of the market like Speaking Circle and Hermit Gardener helped this deck make a serious impact throughout Tuesday’s tournament. Four players brought this build for a combined 10-6 record, including one Top 4.

TheBergund made a statement Friday morning with an impressive trophy run on the back of a Hooru Control deck built to prey on all the Valkyrie decks. There were two additional copies on Tuesday, one splashing Shadow, but neither performed as well as Friday. Three players ran decks similar to this for a combined 8-5 record and one trophy.

While only one player, Colacoma, brought a build like this, it was strong enough to find a place here. Built by his teammate Cananda, the power of both the Speaking Circle as well as the synergy of Hermit Gardener + Haunting Scream, allowed Colacoma to pilot this to a perfect 5-0 through the swiss in dominant fashion, before finally dropping their only match in Tuesday’s finals. Definitely worth checking out.

I almost grouped this in the other category, but Deedub’s matches were so impressive throughout Tuesday’s tournament that I chose to include it here. A deck full of draft all-stars, this Rakano aggro deck smashes decks hoping to stick a Speaking Circle on six, and can deal massive amounts of damage out of nowhere. Missing Top 4 on tiebreakers might bury this list on the decklist viewer, but don’t miss out on seeing how sweet this build is.

Apart from iplongo’s Top 4 finish on Friday, the TJS decks didn’t put up impressive numbers. The power of these cards is without question, so expect to see more of this deck. Three players piloted this deck to a combined 5-6 record.

Dubbed “Krullysian” by Team Barbarian Camp, this deck takes the classic Elysian Spells shell, and adds a little spice with Krull, Xumac Occultist. Theovermaster managed to take this to his third Top 4 on Tuesday. Time will tell whether “Krullysian” is here to stay. Three players brought this deck to a combined 6-6.

Likely the biggest underperformer on the weekend was the various Pyro Combo builds. A surprising seven people brought different versions of this combo deck, but a 50/50 record against the field combined with an 0-4 goose egg against Xenan left much to be desired (8-15).

Another disappointing performance over the weekend was the lack of Mandrakes — both the number of decks played as well as win rate. Empire of Glass provided a ton of powerful Mandrake options, but we have yet to see them make an impact in the tournament scene. Four players brought Mandrakes to a combined 5-8 record.

While Hooru Control had TheBergund’s trophy to hold up its record, Feln Control had no such luck with a combined 1-5 record

The full list of decklists can be found on Eternal Warcry:
Challenge #3
Challenge #4

Be sure to check out the upcoming tournaments at battlefy.com/tuesday-night-eternal and catch the stream at twitch.tv/telemokos.

Next week is Throne!