The first two weeks of the Tuesday Night Eternal winter season are officially in the books. Congratulations to Stomguard798 and TheBoxer who won Challenge #1 and Challenge #2, respectively.

This season of Tuesday Night Eternal is comprised of 12 weekly challenges culminating in a invitational championship on March 6th. There are still 10 more tournaments to punch your ticket to the finals. Players who earn the most amount of points throughout the season will also be invited to compete for the top prize.

Thank you to everyone who has participated, supported, and tuned in to watch the tournament on Twitch. Special thanks to gatosujo and Ilyak for co-commentating the first two tournaments with me. We have our first glimpse of the Throne tournament metagame. It will be interesting to see if Empire of Glass will shake it up the next time we play Throne. 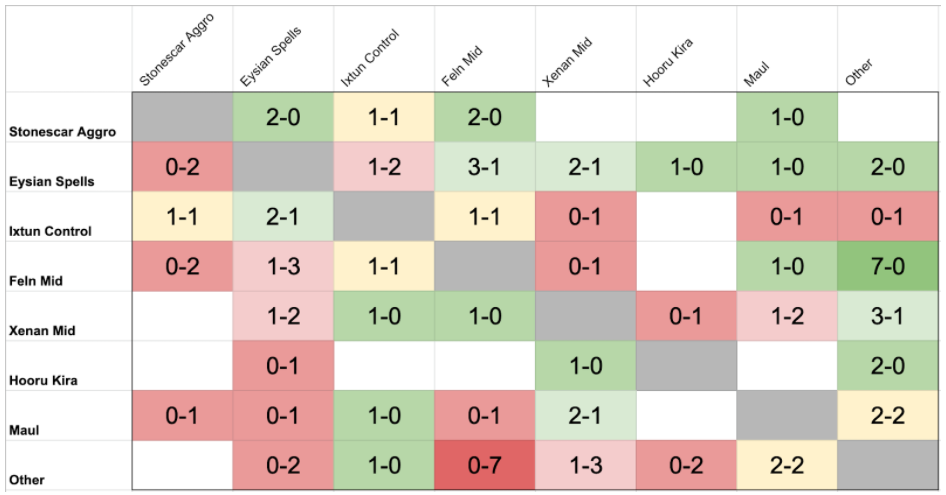 First up we have Stonescar, a classic aggro strategy which Stormguard798 piloted to a trophy and iplongno also ran to a 4-0 in the swiss of Challenge #1. The two Team Enteral Journey [TEJ] teammates combined for a 8-3 record, including two top 4s, and one trophy. Stormguard798 wrote up a really great detailed article on the deck here.

Next up is the popular Elysian Spells deck we’ve most recently seen featured at Worlds. This deck can attack on multiple angles and is one of the most consistent decks in the meta. Doc28 and theovermaster both piloted this to 2nd place finishes in the two tournaments. Four players ran this deck for a combined 9-6 record, including two top 4s.

It’s no surprise that LightsOutAce’s big worlds win would be an attractive option for these tournaments, and we saw that here with classic Ixtun Control. While some of these builds were a little different, the core set of control spells is essentially the same. Four players played this to a combined 9-7 record, including one top 4.

I went ahead and grouped several Feln midrange decks together, but there were quite a few differences between them. The most successful build was clearly TheBoxer’s AtAnyCost/Felrauk build, which he piloted to a trophy in Challenge #2. Four players ran a similar strategy to a combined 10-7 record.

Another two-faction midrange deck that saw a lot of play was Xenan. Xenan gives you access to some of the more powerful top-end in the game as well as efficient removal. Three players piloted Xenan decks to a combined record of 7-6, including one top 4.

Surprisingly only one player, Prackalakin, brought Hooru Kira over the last two weeks. However, they did pilot it to a 3-1 record and only missed top 4 on tiebreakers. This is still clearly one of the strongest decks in the meta, and I doubt it’s going away anytime soon.

The somewhat dark horse of the first two weeks was multiple decks featuring Maul. We saw two different versions — either straight Elysian or including Shadow for the powerful new promo Dichro’s Ruin. While the combined results might not catch your attention, WitchyDiana successfully piloted the deck to a top 4 in Challenge #1.

The full list of decklists can be found on Eternal Warcry:
Challenge #1
Challenge #2

Be sure to check out the upcoming tournaments at battlefy.com/tuesday-night-eternal and catch the stream at twitch.tv/telemokos.

Next week is Expedition!