Whispers of the Throne has finally released, injecting a batch of new cards into Throne and Expedition. History shows us that campaigns (and mini-campaigns) tend to dramatically shake up formats; in the Tales of Horus Traver, big bad Tavrod crashed the party and stomped all over his competition. Although he was never nerfed, Tavrod’s presence defined Eternal for a significant period of time. Vara, Endra, Korovyat Palace and Saber-tooth Prideleader further attest to the power level of limited releases, and this week’s bundle will be no different.

What can we expect moving forward with all these new cards?  How will both formats change, and which cards will instigate and perpetuate these changes? Predicting the future is a tall task, but nonetheless I will attempt to do just that! Let’s start by taking a look at what will change in Throne, the format with the largest available card pool in the game. 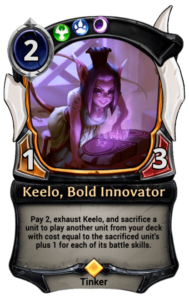 I’ll cut right to the chase: Keelo is very strong, and Makto plays very well in a Keelo “Pod” shell. There are a bunch of sweet units that curve into Makto with Keelo, Makto curves into Icaria or Telut and the game reaches its conclusion. It’s been a hot second since Makto saw his rise to stardom, but I think now’s the time for a Revenge renaissance.

The real star of the show, however, is our resident Birthing Pod on a stick. Two aspects of Keelo differentiate her from Pod; she’s a unit, and her ability cannot be responded to if you activate it immediately after playing her. The good news is that, if you sequence accordingly, you’ll be able to get the unit you need before your opponent’s interaction window. The bad news, however, is that your opponent can interact with Keelo using single-target removal. One of the frustrating parts about playing against Birthing Pod was that it required very specific interaction to be dealt with; Keelo is a unit, and a Torch-able one at that.

While there are some upsides to having your Pod be a unit, I consider it to be a significant downside. Single-target removal spells are very prevalent, so you’re not required to allot specific slots in your deck for the purpose of beating an uncommon card type. This means that your opponents will usually be able to answer Keelo, and you must plan accordingly. Nonetheless, the payoffs for building your deck around her are massive, so expect to play against this archetype regularly on ladder. 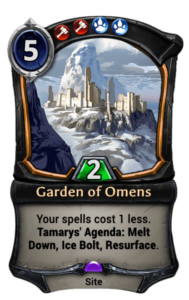 Most constructed playable units in Eternal impact the board or fuel a synergy engine; you can’t really get away with random fatties or aggressive early drops unless your deck has payoffs that convert those stat lines into more impactful sequences. Garden decks tend to be very good at praying on units that need to stay on board in order be maximized, and with each new expansion comes a wave of impactful units that do something besides attacking and blocking.

Don’t get me wrong, control decks are still a strong option in Throne. Until Garden of Omens gets nerfed (again), control will be a pillar of the format, but it’s worth noting that the deck gained virtually nothing from the bundle while lots of other strategies received powerful support. Furthermore, I don’t think unitless is particularly well positioned into a field of Makto nonsense and Even decks, so you’ll need to have a significant skill edge over the playing field at large in order to succeed with this deck in an ECQ. 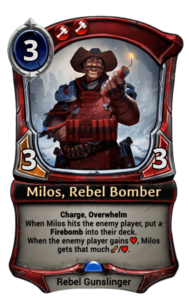 Oni Ronin aficionados rejoice! Fire-based aggressive strategies are back on the menu, in no small part due to Milos and his anti-Sabertooth, anti-Golem text. Milos singlehandedly solves two of aggro’s biggest problems: ambushing cats and early card advantage. In addition to being a powerful hoser, Milos is pretty respectable on rate as a 3/3 charger with overwhelm, meaning that he’ll rarely be a dead card in your hand.

Milos also happens to be a Gunslinger, which is surprisingly relevant and could lead to some clever market choices in Stonescar Aggro like Hideout Pistol. Furthermore, being a Gunslinger might give Rakano Aggro the unit type density to consider running Steady Marshal as an above-rate one drop that doesn’t die to Blazing Salvo. All in all, Milos significantly expands the options for Fire-based aggressive strategies in Throne and should give them more of a fighting chance going forward. 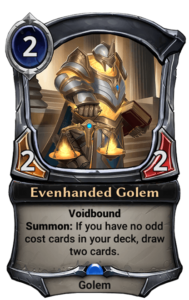 Those who’ve watched my stream recently can attest to the power of Evenhanded Golem in tandem with Grodov’s Stranger and Traver’s Farm. So long as you avoid playing your Golems with a single active Farm on board, the deck functions very smoothly and has all the tools tackle the Throne metagame. Up until this point, the clean answers to Golem have been fairly lackluster; Royal Decree constitutes a significant tempo loss, and Magebreaker is too weak of a card to consider maindecking.

To circle back to Fire-based aggro, the very presence of Milos will have an effect on the strength of Even decks in Throne. Milos not only shuts off your Golems when he connects but counters the tempo loss you’d usually experience from an ambushed Sabertooth Prideleader. I want to emphasize that I’m not preaching the downfall of Time-based Even decks; rather, I see this development as bringing them closer to Earth relative to the rest of the format.

In the most recent ECQ, I consciously chose to play Skycrag Dragons over Menace Dragons due to the diminishing returns of stronger cards in relation to a much poorer powerbase. Part of this equation was evaluating the available payoffs, and at that time I concluded that sticking to two factions was the best way to build the archetype. With that said, I expect Whispers of the Throne to give new life to tri-faction decks in Expedition with its cycle of 2-cost legendary units.

At first glance, I expect each unit in the cycle to see some amount of play in Expedition. It’s not immediately obvious where Keelo, Elham and Kaspar will fit, but I expect that there’s at least a solid tier 2-3 deck featuring each one respectively. Vox and Razca happen to fit well in existing shells, meaning that either one of them could turn their faction combo into a serious contender. We’ll see how this shapes up as the format progresses and deck builders refine and retool their lists, but as of now I’m feeling optimistic about each member of this powerful cycle. 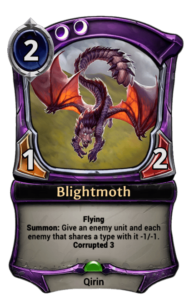 This card is really strong against Dragons and Strangers, and it slots super nicely into the FTS sacrifice decks. Decent bodies with Corrupted are almost always better than they look, with the best example of this being Rectifier. Hence, I expect Blightmoth to play a similar role in decks that can take advantage of Corrupted and want to improve their matchups against tribal strategies.

As someone who has played an extensive amount of Dragons in Expedition, I can tell you right now that I’m not looking forward to staring this guy down. Dragons is very good at being an early game control deck that pivots into a mid-to-late game evasive beatdown deck, and Blightmoth in tandem with light disruption makes the latter significantly harder to sustain. For what its worth, I do think Blightmoth will make the format better overall since it’ll do a reasonable job policing Stranger decks. I’ve felt for a while that the sacrifice decks were a card or two away from making the Strangers matchup very lopsided, and this might be the missing piece to the puzzle. 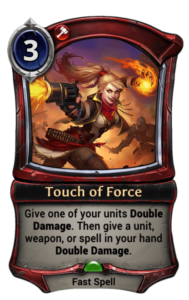 This one definitely needs a bit of an explanation. Since its confirmed that Yushkov, Brutal Tyrant himself deals the damage from his ability, granting double damage will make his ability extremely potent. If your double-damage Yushkov happens to sacrifice a Grodov’s Stranger, you get a twelve damage Fling and a Korovyat Palace in hand for your trouble. Touch of Force has been awaiting its moment to shine, and I think that moment might be upon us.

I could see a Praxis midrange deck with Yushkov being a great shell for Touch of Force in Expedition. Yushkov gives Praxis decks inevitability and an answer to large board stalls that doesn’t require the deck to warp itself around ramping to Kairos, meaning that you can lower the deck’s curve yet maintain a lot of staying power. Korovyat Palace will be a lot stronger in Expedition than it is in Throne, so the payoff for finishing Yushkov’s mastery is massive. Finding the best shell to do that will be valuable going forward, so be on the lookout for Touch of Force!

Thanks for reading, and I’ll see you on ladder!